word of the day: spill

Setbacks, never a fun thing for me. Most of the time, I don’t even notice setbacks, I just push through. I only notice them when I’m at the end of my rope, resources depleted and it will really only take just the one thing to set me off. To make a long story short: last night was bad, this morning I’m better.

I’d just gotten back from meeting Kris and his girlfriend for lunch at The Heights, I was definitely feeling the effects of the Thanksgiving cocktails and the early morning working, so I kinda drooped, wilted and let my guard down. The first thing I noticed as I went to tidy up a bit in the kitchen was that the cap of the bottle of Limoncello I took over for TG at Kyle’s place wasn’t completely screwed on. The contents of the bag were sticky, etc. which wasn’t a big deal until I noticed that the Firefly series DVDs he loaned me were also in the bag and my moving it had caused just a bit of spillage. Luckily the packaging of them was such that it was easily dabbed and wiped off, so no big deal. Slight panic, but no big deal.

Then I pretty much sacked out watched tv and eventually took a wee nap on the couch to the dulcet tones of some documentary on the Science Channel. Upon waking up, I realized I should probably go to bed and that I probably shouldn’t have left a candle lit while I slept, but I’m an adult–no problem! In my sleepy, drowsy, no-balance-having state, as I moved to blow out the candle I managed to knock it over. Candle wax everywhere, two wicks still lit and me having a definitive freak out. After blowing out the flames and ensuring that nothing vital was damaged, exceptionally wet or on fire, I had just enough rational brain to tell myself, “You’re too tired to handle it now, it can wait until morning.” 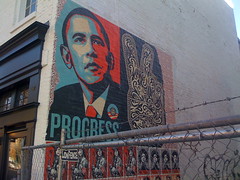 So I went to bed, totally pissed off at myself, took me ages to get to sleep and I was up very early. I looked online for some methods to clean candle wax–this one really worked well–and scraped things off, the biggest hit was that wax poured all over my Wii Fit balance board. So this morning was a lot of scraping, vacuuming, ironing through a damp towel and more scraping. I’d also planned to head out to the Post Office, and be back in time to head to brunch with some o’ my mates. Somewhere in the midst of scraping, I got my head back on straight and was able to say to myself, “You need to do this, this and then this.” So I got some new music on the iPhone, grabbed my package, checked the bus and metro times and headed to the Post Office.

Just like the mural says above, “Progress.” And the more I was out and making progress, the better I felt. No one to blame but myself, it was an accident and it could have been a lot worse. After the post office, I swung by Starbucks for a little liquid consciousness and then hit Target for a Wii Fit Kit which comes with a cover for the board as well as other things that are useful. The wax was reddish brown, so even getting it all off, the stain remains and covering up the still-functioning board is the easiest solution. I was able to get a lot of the wax out of the carpet, though I kinda singed it when I wasn’t being careful, so I might have to head to IKEA for another $15 floor rug–boo hoo hoo!

I’m set for brunch in a little while and now Kyle and his sister want me to come along to visit Baltimore afterwards. I’m sure later on I’m going to pay a bit for overbooking myself, but right now I’ll go with the flow and have a blast. The spillage theme night still feels like a setback, but now… just a minor one. 😉