Ok who found our really nice weather and replaced it with this soggy rainy dreary crap? I’m all for lazy Sundays, but you want to feel like you could go somewhere if you had to. Aside from an early morning laundry run, I haven’t done much today except light cleaning, kitchen prep, the usual. Would have gone to the store for some crock pot meal ingredients, but not in this weather! 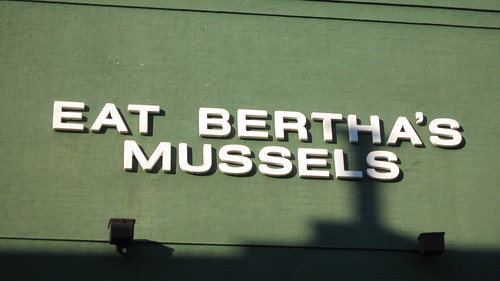 I have been seeing bumper stickers for this place nearly my whole life. It was right up there with “South of the Border” that everyone talked about but I’d never seen. I was starting to wonder if it was a real place. Well yeah, totally real. Kyle, Wendy and I went up to Baltimore yesterday after brunch and it was a fantastic day for it. A bit chilly down by the water, but the skies were blue and sunny, the perfect day to play tourist. We drove up to the Inner Harbor, then walked through Little Italy over to Fells Point. I love going to Baltimore, but I’ve pretty much only been for bars and the Harbor, so it was great to see places that were new for me.

DC is a real city and all, but it doesn’t always feel as natural as other places. I miss cities that feel like they grew normally and weren’t overplanned. Though I will admit that going to New York, those tall buildings freaked me out. But I miss Philly a lot and going to Baltimore is the closest equivalent. Most people I know in DC who have cars never seem to want to go to Baltimore, and it is a bit of a drive and someone has to be the designated driver, blah blah blah. But without a car, one can’t get there on the weekend without resorting to Amtrak and that’s nowhere near as convenient as it sounds. Still, this was a hell of a day trip and considering that it’s late November, I wouldn’t have thought we’d get such a nice day for it. The drive up and back was fast and I was totally loving Wendy’s Garmin. It’s a preachy little thing tho.

I was just checking my calender and it looks like even though I didn’t sign up for NaBloPoMo officially, I managed to maintain my usual rate of at least one post a day. It was last year’s event that got me posting nearly every day, so I figured it was pointless to join again. I sometimes think about taking a short break from blogging, but so far it hasn’t gotten annoying or felt like too much of a chore. In fact, it makes me want to get out more or do more just so I’ll have something interesting to write about. I mean it’s not like anyone would read this if it were boring!