inauguration: they came, they saw, they froze! 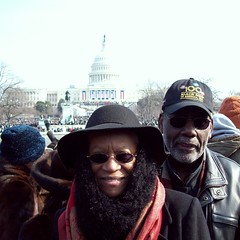 I’m not saying that having them come here hasn’t been stressful and more than a small pain in the ass, but I am glad that they got to come here and share in this historic event. They got out of here around 4 in the morning and headed out towards the metro and basically stood around in nearly the same spot all morning long. My father isn’t quite the shutterbug that I am, which is odd since when I was younger, my dad was rarely seen without his SLR, but I think the digital transition has made picture-taking seem less important to him. Plus he still has to figure out how to get the pictures off of the darned thing! 😉

They were interviewed by their local paper and my father told of missed opportunity:

“Both of us have always felt guilty about the fact that we didn’t get to go to the march on Washington, D.C., in ’63, and we had the chance to do so, and we didn’t,” said Gray, 68, of Greenville. “We’ve labored with that all these years.”

I’ve uh… never heard that story before, but anyway. It’s been lovely to see them and it will be lovely to see them leave. This apartment was not designed for three people, this was made plainly evident during the morning bathroom queue.

As they say, tomorrow the real work begins, and it’s true. Thankfully I’m able to telework tomorrow, but come Thursday it’s back on the metro, back to the grind. So all you visitors… go home!