food: brunch in the burbs

I wasn’t sure I’d get in a brunch this weekend. That wouldn’t have made a very good start to The Brunch Project. The week moved more quickly than I thought, even though it didn’t feel like it and when Friday came all I was thinking was new BSG! Due to the events of Saturday evening, when Sunday morning came, I was kinda hurting and satisfied to skip it completely. But I had a text message from James that he was up for brunch and I managed to rouse myself and metro out into the wilds of Arlington for a really nice meal at Tallula.

It’s a cute place, off the beaten path that one would normally think of when visiting Clarendon. Big racks of wine inside the restaurant, a nice skylight and a central fountain. I realized the skylight caused a bit of a problem as diners on one side of the restaurant were bathed in direct sunlight. Great if you’re at the beach, not so much if you’re squinting your way through a meal. 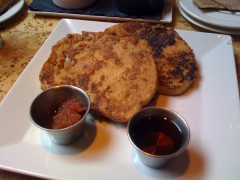 It’s sit and order brunch and the menu’s got some yummy sounding items on it, but for some reason I was feeling like French Toast*! This is pretty rare for me, since I often opt for a meat/protein menu item instead of what amounts to dessert for breakfast. And one of my biggest laments with non-buffet style places is that you pay through the nose if you wanted a “full” (not Full English) breakfast**, either ordering a la carte from side options, or ordering two entrees together which would be more food than most could handle. I added a side of sausage and we both got the cheddar grits… and I got a bloody mary. Hair o’ the dog, right? 😈

The french toast was sourdough bread, dipped just before cooking and unfortunately we each had at least one slice that was dry in the center. It was cooked with some “yum-yum” as James called it, and had a sort of crumble-topping crust on both sides that was indeed yummy. I’ve never combined apple butter with maple syrup on my french toast, but I’m now a convert. The grits were creamy as promised and had a good helping of cheddar cheese, not too overpowering and not overcooked. I’m still a little new to ordering bloody mary cocktails as I don’t really like them over-spicy or with tons of floating seeds/food debris, but it was tasty. 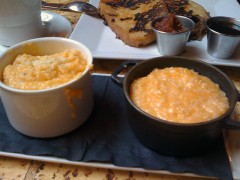 I can’t find anything really bad to say about our experience. Maybe the only thing was that it was kinda crowded and our waiter–who had the perkiest ass I’ve seen in a while–kept telling us something about “We had 60 people on the books and now we’ve got 200…” This phrase was repeated to other tables around us as an apology for being slow. We have no idea what he meant aside from it being a justification for not being able to get to us right away. Even so, we weren’t rushed to finish our meal and the check didn’t arrive without asking. There were a few parties waiting at the door when we left, but we didn’t really linger and it seemed as though there was a fair balance between fast and slow diners.

Ok, the restaurant did have one of my pet peeves: no salt and pepper shakers on the table. I don’t know if this is a move to conserve table space or keep people from stealing them. I was concerned that when I asked for some, an angry knife-wielding chef might come out to our table asking, as my mother always did, “Did you at least try it?”

Aside from that, I had a great time and it isn’t that far from the Clarendon Metro station. On a nice day, one could even enjoy the walk in and around the neighborhood.

Tallula goes in the “Yes” column. Prices were fair, food was tasty, service friendly and fun to look at. As most places will, it did get a little crowd-noisy, but as the larger groups left, it cleared up. James is lucky enough to live right down the block from it, but once spring rolls around (or we get more weird 50/60 degree winter days) I’d make the trip again.

* Being fairly well hungover, I think my brain was feeling like French Toast too.

** Classy, or not, as it may be, I still miss having an IHOP nearby where pancakes are standard with most menu options and cheap enough add regardless.