Since we figured too many people would be heading towards the beach this past weekend, Randy and I took a day trip in the opposite direction into Virginia. We didn’t really have a plan in mind, though stopping off for some retail therapy at the Leesburg Outlets was definitely on the agenda. It was a gorgeous day, so just driving through the “country” was a nice change of pace. I guess it may have gotten up to the 80s, but there was a constant breeze in the air and the rain stayed away until much later that night. 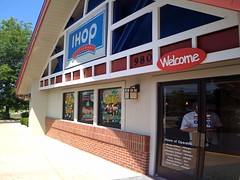 It was tax-free weekend in VA, so the outlets were PACKED, we could tell that much just from the traffic trying to get into the parking lot. We called for petrol first and did something extremely suburban for lunch… IHOP!

After stuffing ourselves full, a walk around the shops was just what we needed. After a good 20 minutes or so of looking for a parking spot, that’s just what we did. Even though the crowds were out and the discounts were posted, there still wasn’t a lot that interested me. A pair of shoes was my biggest indulgence. And some of the stores really need better customer traffic flow. In many of them, the check-out line was wrapped around and to the back of the store, crossing over where people were still shopping. I love me some tax-free discounted shopping, but not that much!

After the shopping we got on the road, he knew where he was going and I had no idea. The city boy in me was way too far from his cars and buildings. After some driving around through various historic these and stately those, we ended up in Middleburg. They’ve got a cute little “Main Street” with some nice shops and eateries, though it was nearing 5 or so and many were shutting down. This was a surprise to me since summer daylight lasts til near 8pm. We were able to do a lot of window shopping, but nothing more.

One highlight was The Home Farm Store, a shop resembling a mini Dean & Deluca with fresh food from Ayrshire Farm. We’d just stopped in to buy something to drink, but their butcher and cheese counters tend to draw one in. While she rung us up, Randy asked if they had a sister restaurant, which they do, Hunter’s Head Tavern. The cashier and butcher were both very enthusiastic that we should give it a try as it was only 8 miles west.

Another cute spot was The Tasting Room, Boxwood Winery’s off-site wine bar and shop. We only had one glass each as it was nearing their closing time too, but the wines were good. None of the selections were more than 5 years old, the shop was a bit austere, much more modern than you’d expect considering that it’s Boxwood’s only spot for open tastings–one must make a reservation for a tour & tasting at the actual winery.

We did head out to Hunter’s Head Tavern in Upperville, but unfortunately I can’t report a single thing about the place. They were booked up, so far as we could tell, but our experience definitely counts as one of the most extreme I’ve ever had.

We headed to the “please wait” sign and… waited. After a moment the hostess came over with a smile and a welcome and asked how many were in our party and then whether we had a reservation. We told her we didn’t and she said “Oh, you should have rung us up,” her accent getting decidedly more British than it had been a second ago. She would repeat the phrase “You should have rung up” and similar over the next few minutes. A couple behind us said that they did call and were told they wouldn’t need reservations. The hostess scoffed and replied “Well you obviously didn’t speak to me.”

I’ve been out on a Friday or Saturday evening, so I understand eateries being busy and there being wait times, so we tried to ask how long we might have to wait for a table. She got flabbergasted and didn’t exactly yell, but it came close, and said “I don’t even have cutlery or flatware to give you!” Both we and the couple behind us were trying to reason with her, but her attitude seemed well beyond that point. Randy and I gave up and headed back to the car, and that’s when the hostess hurried after him with their card and said “Just ring us back!” We said we were fine, but that was definitely the weirdest moment about the whole thing. Did she expect us to call the restaurant from the parking lot?

My friend Betsy assures me that we didn’t miss anything, recounting her experiences at Hunters Head Tavern to be of fairly average food and rude service. (No kidding!) But really, if your restaurant is full, just say so–politely, please. Don’t make it seem as though it’s the customer’s fault for not calling ahead.

As Upperville is about 50 miles from DC, I doubt I’ll be heading out there anytime soon for a second try. It’s too bad, since I love trying out new places, but if the hostess experience was any indication of how our meal might have gone, maybe we were better off leaving. 🙄