I thought I’d already had my proper FML moment of the year when I experienced a pants malfunction before leaving the house for work. Oh no, Fate was just warming up for something even better! For some reason I’ve had a serious klutz/stumblebum issue that has seen me whacking various parts of my body, notably my head into things. Kitchen burns, face into doors, sidewalk stumbles*… if Jerry Lewis or any other pratfall artist made it famous, I’ve done it.

This, however, takes the cake–size reduced for the faint of heart. With the stress of the move** upon me, I’ve been having issues sleeping, mostly getting to sleep and staying there. But this weekend, a lovely nightmare decided to descend upon me. To make it even better, it was one of those “in reality” nightmares where I was in bed, looked up and saw a huge angry-looking insect swarm over my bed. It was like something that might have been cut from The Mummy for being too scary. Normally bugs don’t bother me, but this looked kinda nasty so my dream-self–or so I thought–scrambled out of bed sideways instead of bolting upright.

Yeah, well it turns out that was the moment dream became reality and my ½-awake self ran smack into the corner of the dresser next to my bed. I wasn’t even sure what had happened at first except for a serious feeling of PAIN PAIN PAIN that wasn’t your average headache or even headdesk. Also noticing that I was out of bed for some reason, I took my pain-filled self to the bathroom mirror and ooh it was not pretty. The picture above was the morning after, but imagine it with a lot more blood and a serious WTF?! look on my face. It wasn’t a wide-open gash gushing blood, so I didn’t see the doctor. Honestly, I’ve had kitchen knife accidents that were worse. 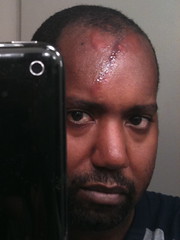 After a bit of sulking and ice and neosporin and rest and video games, it’s gone down a bit, but I’m still having to reassure myself that I am a pretty girl.. I am! Now there’s no pain and it appears to be healing at a decent speed, but I may be stuck with a very unsexy bruise for a while but, I hope, no scar. I’ve been encouraged to come up with wildly fabulous stories as to what happened***. I never thought that if people were staring at my forehead, I’d hope that it was at my balding instead of anything else, but there you are.

I’ve found that if I wear a cap, no one can see anything at all, though that probably won’t work in the office so I’ll just have to bear it. I am glad I took today off though**** since it could probably use even more non-stressed time to heal up and let the ouchie gel do its thing.

Still, if any of my readers have a more interesting story I can use for why my head looks like a carnival freakshow geek incident gone wrong or a misguided fan attempt to produce the Harry Potter scar, the floor is open to submissions.

* With dropped iPhone, of course.

** And likely an impending birthday.

**** “Took” is the nice way of saying that my manager, bless her, said “You’re taking Tuesday off.” My opinion on the matter wasn’t solicited.