I seriously think my dreams are trying to tell me something.. or keep me from sleeping.. or kill me, I dunno. 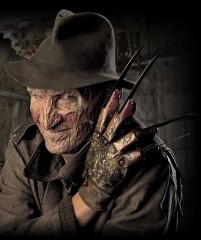 I don’t know if this was stress-related or just my subconscious having a bit of fun with me. After spending much of the day off tending to my wounds and going near scorched earth on a bed bug problem* that I’d been ignoring**, I was happy to just get some sleep.

The long and short of it is that I found myself walking “home” in strange city after dark through a clearly not-so-good area. This didn’t seem to bother me until I noticed that one pair of a smoking/loitering duo detached from him partner and started following me. For some reason, I was kinda dressed up, maybe I’d just left a party. He comes up and says, “Yo man, can you spare $100?” After I said no, he grabbed my jacket and said he’d take what I had. I remember yelling, “Oh hell no, not tonight!” but losing nonetheless. Then I realized it was a dream and woke myself up–with no ill effects this time.

It was about 5 minutes before my alarm for the morning should have gone off. I glared at it for not realizing that my dream self was being mugged and intervening sooner. Admittedly not as disturbing as waking up to a bloody forehead, but still it has me thinking about asking a doctor to prescribe some Hypnocil just to get some dreamless sleep for a few nights. 😛

* It probably merits its own blog entry, but suffice to say I now own both impermeable pillow and mattress protectors, I’ve practically boiled all of my bedding and seared it dry and have spritzed bed bug repellent/killer† all around the bed and sheets. My entire apartment smells of cinnamon, it’s like living in a pack of Big Red.

** I think I was more in denial as the bites did appear, but I seem to be immune to the itchiness that others report. For a while, I thought I was just allergic to my sheets.

† I got a tiny drop of the stuff on my finger and it stung/burned for nearly an hour. I hope it’s just as effective on the bugs.