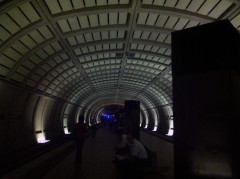 Good morning and Happy Hump Day to all! The boy and I are used to leaving the house early enough that we beat the sunrise, and even though we’re used to going to work in the dark, this isn’t exactly what I planned on.

We were making our still-kinda-tired lumbering through the station and had reached our usual spot on the platform1 with about 4 minutes to a train arrival. We’re having our morning, “What’s ahead for your day?” conversation when all the lights go out without warning. Ok, not all of the lights. Thankfully it seems the station has some emergency lighting in place, but like being in a building after the HVAC system powers down for the day, the station gained a really weird silence. The escalators from the faregates to the platform were already not working, so no one got caught on those and I couldn’t see the elevator from where we were, but we didn’t hear any shouting so it was probably OK too.

After a few seconds, the station manager made an announcement over the loudspeaker–that I suspect also goes to some central office–requesting maintenance as the power had gone out… again. I took a quick picture and prepared the usual #WMATA tweet, but couldn’t send it because apparently the cell towers servicing that station also rely on power. Good to know for future emergency situations. Thankfully, train service was unaffected, our train arrived in a minute or two and we were on our way. The tweet was sent, fellow riders were notified and I could look forward to my work day:

When I got to my destination and cell service was back to full, I got a request from NBC Washington to use my picture/tweet and I’m told that it was featured on the air. We watch NBC 4 every morning, but it figures the one time my writing is on TV–yes, tweets count as writing–is the time I logically would have to be away from home to get it noticed. 😛 But from their account2, there was a power outage at the next station up the line as well and power was restored to both stations within a few minutes.

Not really a scary experience, but an unexpected one. It seems like WMATA is having a tough time of it this morning, but anytime the power is going wonky, customers are going to be a lot more concerned and a lot more vocal about it. Especially social media junkies… like me.

1 You know what I mean, everyone has “their spot”.

I don’t know if there are grues in the Metro system, but we were probably in danger of being eaten by one.