I have been programmed with a true sense of humor. If a joke is funny, I will laugh. 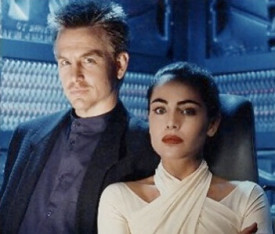 I often repeat a version of this, and no one ever gets it. It’s about the only line I remember from the short-lived (9 episodes) series “Mann & Machine“, one of the many “human cop/android partner” shows1.

The human had just told an unfunny joke and after not getting any reaction, he questioned whether or not his android partner had a sense of humor. A throwaway line, good for a chuckle in a procedural set-in-the-future cop/android drama. Except when you remember that androids are often used as the writer’s metaphor for the human condition. That small piece of dialogue has been coming back to my mind more and more because honestly, just because someone calls something a joke does not mean it was funny. And unless I am schmoozing, networking or trying to get into someone’s pants, chances are I don’t laugh at jokes that aren’t funny either.

And what I find interesting is people’s reaction when their jokes fall flat. Not pity chuckle flat, but just flat out bombs. “You need to lighten up.” “Some people just can’t take a joke.” “You have no sense of humor.” instead of “I guess that joke wasn’t funny.” and more importantly “I should have realized that joke wasn’t funny.”

Thinking before we speak isn’t easy. I just got off the phone with a client earlier and halfway through the phone call, I became overly aware of the fact that I felt like I had no control over what was coming out of my mouth. It was all good and professional, but was I thinking about what I was saying, or was I on auto-pilot while actually thinking about something else?

The more I hear people attempting to tell jokes, or respond in situations with humor that just isn’t funny, I’m reminded that comedy is hard, and there’s a reason comedians practice material before sticking with a joke.

But enough of my musings, calling it a “joke” doesn’t make it funny, and getting a laugh–audience depending–is no better an indicator of the same.

Back to work, happy hump day!

1 Seriously, there have been more than a few with this premise. Holmes & Yo-Yo, Future Cop, Total Recall 2070, and of course Almost Human.