As many local instagram feeds are now showing, it was a long winter with random days of heat, but we’re finally through it. Signs of spring are showing up in the DC area, and we’re now on the lookout for the cherry blossoms to burst forth along the Tidal Basin!

Even though the allergies make my face feel like it’s either melting or on fire, I love the arrival of Spring, as my instagram account shows…

Nice, right? Just a quick snap while walking around Cleveland Park one day when I was a bit early for brunch. Even though their pollen is one of the types that gives me grief, I can’t resist how photogenic cherry blossom trees are.

…and apparently neither can other people. 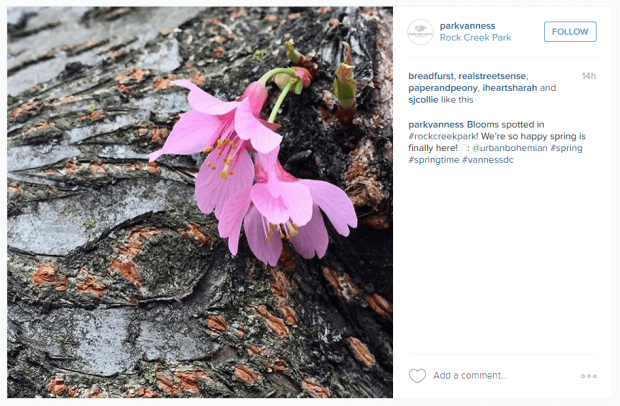 A day or so later, I saw I’d been mentioned in a comment on instagram and it led to the above photo, taken without permission and cropped down.

I don’t know about you, but I’d think a new apartment building with units going from $1000-7000 could maybe afford to pay someone to take professional instagram photos for them instead of just saving and cropping photos from other people. I see this and have had this happen to me by hashtag campers, realtors, hotels, and restaurants–especially restaurants and I’m sick of it.

And yet, I still don’t know what I want my reaction to be… this time. Politely asking them to remove it or give appropriate credit? (Yes, I have a preferred credit line, it’s very simple.)1 Reporting it to instagram as copyright infringement? Putting them on blast on their social media accounts?

I’ll likely just report it because I’m also tired of the reactions any of the other methods brings. Shock, anger, outrage, “everyone does it!”, “what’s the big deal?” and my favorite, “you should be glad for the exposure.” And that’s way more energy than I feel like devoting to it. Especially considering this isn’t a place I plan on doing business with in future.

And I’m glad we’re past the idea that everything on the internet is free, but this new method of “credit” that’s akin to taking someone’s art and hanging it under your name, but placing a small Post-it® Note under the frame with the original artist’s name on it is just as frustrating. It doesn’t send them traffic, doesn’t garner them work and it gives the impression that they gave you permission to do it!

But since none of the social networks are actually invested in protecting either their users or their users’ content, I’ll just keep on taking pics and reporting the copies. What else can ya do?

1 brian alexander gray, urbanbohemian.com (or my username @urbanbohemian, depending on where it’s going)