Continuing on the subject of paying people for their work, let me also state the obvious point that copying–or to put it a better way, stealing–someone’s work is flat out wrong. This is a lesson that brands, both established and fledgling, need to learn.

I’ve actually been paid a few times now for photographs I’ve taken by companies and individuals that understand someone should be approached, asked permission to use their work and then fairly compensated for that use. Unfortunately, I’ve also had to deal with those that think, “If it’s on the internet, I can use it!”

It was just a picture of a burger I took at Food, Wine & Co. about five months ago, but it turned into my first copyright violation report1 ever.

This wasn’t the first time I’d seen my photos on someone else’s feed or page. Often whoever is running a business’ feed believes that if a picture was taken on their premises or tags them on social media, it’s unspoken permission to be allowed to use it, attribution or not. Spoiler alert: it’s not.

Most venues are kind enough to, when approached, apologize and work with me to ensure proper attribution. I’ve yet to request they take down a photo, though that’s often their opening offer, which I understand because it’s easier to do that than engage in a back and forth, even if that’s not the optimal solution for all involved parties.

However… what I usually encounter is either silence or flippancy. 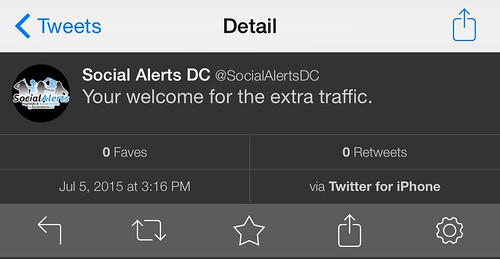 That gem was from a “social” account2 who used a brunch picture of mine from Medium Rare on Instagram without my permission. Using a 3rd-party app to repost it, it did tag me, but they never bothered to ask first. When I called them on it, their attitude was harsh and defensive, eventually taking it down with many potshots tweeted in my direction. And, for the record, it does not drive “traffic” to someone else’s account just by tagging them. I can’t even imagine how many of my photos have been swiped without my knowledge

And while Instagram, Twitter, and Facebook have clearly stated policies and means to report intellectual property and copyright issues, we’re still dealing with the fact that its users simply don’t care.

I may never get rich from my photography4, I still consider it fun, but that doesn’t mean I should stand by and watch others try to build their brands on my work for free. No one should. I once floated the idea to a restaurant to consider a “food blogger” night to their manager. There would be no expected freebies, just people coming in, taking pics of their food3, tagging content and having a good time.

It just seems like it would foster much more goodwill if customers gave their permission and then saw their names or usernames on the social media feeds of businesses they already love. And goodwill means more visits and more business. A somewhat self-sustaining cycle, I’d hope.

I don’t like being super-diligent and trying to hunt down places using my content without my permission. At times I’ve been frustrated enough to never want to use instant photo sharing services or place huge gaudy watermarks over my work, but that’s neither fair nor right–and frankly too much darn trouble.

But in the end, I don’t really have a good solution. And, unfortunately, neither does the internet. It just wants its user-generated content and lots of it. I just hope the users start to realize that they’re in control of their own stuff and not the other way around.

1 It was easier than I thought it would be, but still would be a pain if you saw a bunch of pictures at once. Add to that the fact that Instagram is so walled off, that it isn’t easy to search the service for unauthorized use of your content.

2 I’ll be honest, I hate “Social In [City]” accounts and the like. They’re barely businesses whose only plan seems to be repeating upcoming events from around town and reposting others content as their own on social media.

3 Without judgment, mind you.

4 I caught myself using the phrase, “As a paid photographer–” once and nearly slapped myself.