Growing up in the suburbs, they were everywhere. And I’m using “bugs” as the blanket term for all creepy crawlies: bugs, spiders, insects, etc. They were everywhere, but they were usually outside. When they were inside, it was a matter of terminate with extreme prejudice, or humanely escort them out if I was feeling a particular connection with Nature that day. 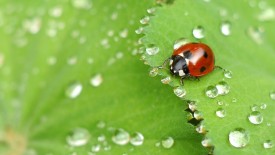 My feelings on them changed a little when I started going to school in Florida where the Palmetto bugs reigned supreme in the on- and off-campus housing. Turns out that seeing a bunch of big cockroaches with wings was a pretty unpleasant site, especially when you weren’t the best at keeping food surfaces spick-and-span. But they were mostly opportunistic and never took up residence.

Fast forward to adulthood and single-living-hood where I have been plagued, yes plagued, from time to time with bugs. Sometimes easily dealt with, sometimes not, the bedbug issue was really not fun, and there was a noted lack of support, so I didn’t really tell a lot of people about it until it was being handled.

I had an ant problem in my current place, due to liking to leave the screen door open and again, not being as tidy as I should have been about my late night snacks. Again, appropriate measures taken, ant problem handled, moving on.

I only write this because I’m waiting on my dishwasher to complete its cycle. It hasn’t been run or opened in probably months now because I had a family of something in there. Maybe small roaches, maybe something else, all I know is they were persistent and easily fell under an spritz onslaught of all-surface Windex. Still though, they’d come back every day or so, and all I knew was I dreaded getting up in the morning to see if I had one or two crawling across the kitchen counter. Seriously, ICK. I was ready for a flamethrower and to kiss goodbye to my kitchen possessions… I could always buy more.

And as I said, I respect bugs. Anything that can live without any kind of sustenance for a long time, then still perk up when the time is right? That’s basically a superpower. If humans could go into torpor without harming ourselves, we’d probably already have been to Mars and back by now. In any case, I’m running a cycle or two, and sanitizing the countertops because I have had it with hand-washing my dishes. It has taught me to be more frugal–? I guess ?–with the dishes I need for tasks rather than my usual, one use and done method, but I can still wash a small amount of dishes just like I can a larger one!

With much luck and hope and good wishes, after the dishwasher has run its course once or twice, I’ll scrub around the edges and the floor and be satisfied, save perhaps a little morning trepidation. But it’s well past time for this–I need my counter space back! It’s very difficult losing half of your working/food prep area to a makeshift dish drying rack and much of the rest of it to daily coffee preparation. I cook small, but I don’t cook low-key, I needs my space! Besides, we’re about to hit Summer in DC, so if I still have buggy tenants I need to evict, I’d best confirm it now and call in the pros before the heat brings out even more insect squatters.

Ah well, no one ever said adulting was easy.