These days, I wish it were that simple. I saw the sign out of the corner of my eye walking through Adams Morgan a few months ago on my way to meet a friend for drinks. I must have been feeling photog’y. 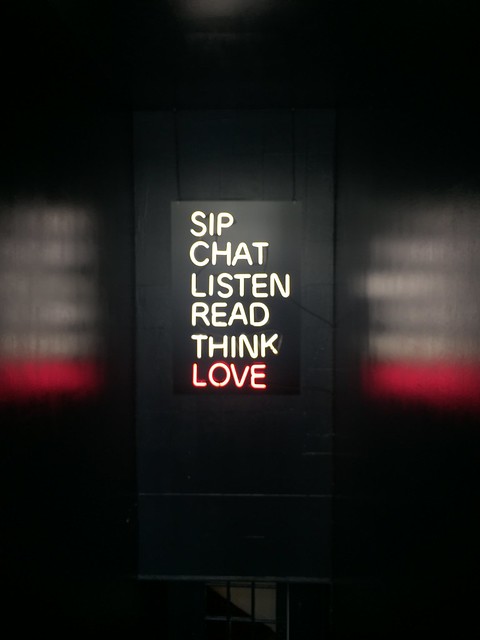 But lately, with what’s going on in the world, I sort of wish I had more moments I could just relax and settle into this kind of vibe. I meet up with a friend once a week for brunch and then I often go out myself for brunch the next day and those have historically been times I forgot about the world for a few hours. But the events of the world are sort of unforgettable right now.

I want a drink. Not *to* drink. That's easy enough. But to go get a drink, with people, to talk or not talk or commiserate or some/anything.

I haven’t been drinking as much lately, but that’s because I drink less at home. It’s more fun and more moderate to go out and hunt down fun cocktails outside the house. If I had a full liquor cabinet at home, I’d want to try to drink to relax, but that drinking quickly turns into just getting drunk. Not that getting drunk isn’t a good tonic to insulate one from current events, but it’s not a sustainable solution.

I will probably go out again for a three-fer this weekend and there will be drinking, but it will still be going out by myself.1 I may see people I know out, but those people don’t really want to talk about stuff. It’s easier to keep it light. Not that bar/club acquaintances don’t care about what’s going on in the world or what’s going on with you, but you will eventually run into that awkward, mutual silence following a “Yeah…” that isn’t exactly uncomfortable, but it leaves you feeling a bit bummed. So you drink, dance and generally be merry instead.

I accept that I don’t have a crew or a squad. The friends I mostly hang out with aren’t always available for going out or they like doing other things. But I’m thinking of suggesting a brunch or a coffee date or a salon of some kind where we can all just stop and talk, or not talk, just be… around other people who get it.

Or not, because people have lives and are busy. We’ll see.

1 And likely going home by myself because I like to have fun, but I also like having standards.