Did you know DC has its own version of The Bean? 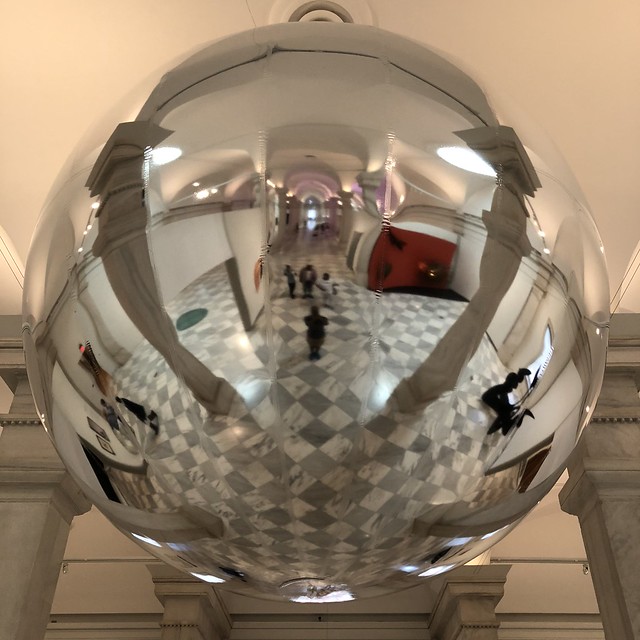 Trevor Paglen blurs the lines between art, science, and investigative journalism to construct unfamiliar and at times unsettling ways to see and interpret the world around us. Inspired by the landscape tradition, he captures the same horizon seen by American photographers Timothy O’Sullivan in the nineteenth century and Ansel Adams in the twentieth. Only in Paglen’s photographs is the infrastructure of surveillance also apparent–a classified military installation, a spy satellite, a tapped communications cable, a drone, an artificial intelligence (AI).

Sites Unseen is currently at the Smithsonian American Art Museum through January 6, 2019.

When I first saw it, I thought it wasn’t actually reflecting the room, but had something projected on the surface. After a few moves playing the “mirror game”, I snapped some photos.

The entire exhibit is fascinating and scary because surveillance is something we’ve normalized, privacy is something we’ve been more or less ok with giving up — at varying stages — for a while now. But he also asks other questions, like what becomes of the digital media after we’re gone? How will others, if there are others out there, interpret humanity based on those artifacts. Also, what does “sight” mean when there is no longer a human to examine and confirm what a computer “sees”?

One placard in the exhibit asks, “How do you share something you’re not allowed to talk about?” There are landscape photos and videos of surveillance sites, lists of codenames, patches made for “secret” organizations. Also included is information on the artist’s planned launch of Orbital Reflector: a satellite that will have no commercial, military, or scientific purpose. Instead, it will be a public sculpture, visible from the ground without a telescope — a satellite that belongs to everyone.

As with most exhibits at SAAM, it’s not huge, but it definitely makes for a brain-enriching walk. I rarely ever plan a trip to American Art/Portrait Gallery, but this would be an interesting one to make a trip for, if you were so inclined.