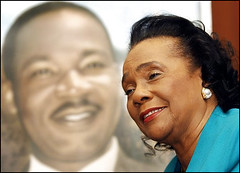 If you haven’t watched The Boondocks, “The Return of the King,” you really should.* Coretta Scott King Dies at 78

“I’m more determined than ever that my husband’s dream will become a reality,” King said soon after his slaying, a demonstration of the strong will that lay beneath the placid calm and dignity of her character.

MLK, Jr.: I may not get there with you. But I want you to know tonight, that we, as a people, will get to the promised land!

“While I have reservations about such a ban being enacted in the District, I respect the council’s decision and want to work with them over the next few months to develop a regulatory system protecting the health of employees while mitigating the risk of harm that some dining and bar establishments may face,” Williams said in a statement. “It is my preference that we unite around this goal and move forward.”

And to lighten it up, Into the Freying Pan

If there were justice in the world, George W. Bush would have to give his State of the Union address from Oprah’s couch.

Not when she’s being the New Age, touchy-feely Oprah, though. Bush should have to face the wrathful, Old Testament Oprah who subjected author James Frey to that awful public smiting the other day.

* And anytime a black person advises you to watch something where the N-word is thrown around liberally, 1: It’s ok for non-blacks to do so without feeling too much guilt, and 2: You really should watch it.