tourism is hard on the feet 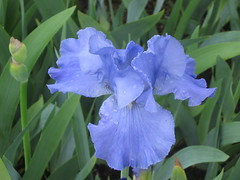 I’m entertaining an out of town guest and that generally means doing at least one touristy thing, or even at least one a day. Yesterday we hit the Botanical Gardens since he’s a botany-geek, and had a great time, I actually learned a lot more about plants than when I’d gone there before, and not even in a boring way. Going with him made me realize that the Conservatory and Gardens are really like another museum without much educational information.

After that we hit the Museum of the American Indian but only got to about one exhibit before our feet were screaming for a break (why oh why did we take the stairs?!). We found some solace and chairs in Au Bon Pain with some good bread bowl soup then headed back here on the metro. There was talk of heading out for a drink at Halo, but the virtual flood going on outside caused us to rethink that so we just hung out here and had a few cocktails of our own and somehow the brilliant idea to play Trivial Pursuit came up. Thankfully we managed to get through it with no arguments and nothing thrown and eventually I won, though the game had been going so long, our hints were getting more and more direct as time went by.

Today is possibly margarita brunch and then the zoo and we’ll see what kind of time is left to wander about the city. But I think I’ll soak my feet first.