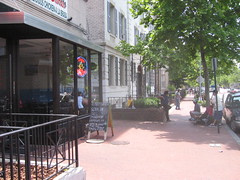 I give up, the heat wins. Finally on Monday I gave up the war versus a/c and turned it on, not very high or for very long, just until I was no longer breaking a sweat just standing still. And then I took a nice long sweat-free nap. *sigh*

The rest of the weekend proceeded mostly without incident, I did a lot of roasting in my own juices at home on Sunday but got out for a quick brunch and a walk, the flower seller didn’t really have anything interesting this week and he was out of lilies. I had my second Bloody Mary ever, this one with bacon, and while it was still very good, the spicy factor really killed me. I think that a lot of places stray from the classic recipe and are using mixes that don’t quite capture the right spice mix, and I know I tasted Old Bay in this one. Which is great on popcorn, or steamed shrimp, but in a drink it totally wasn’t working for me. 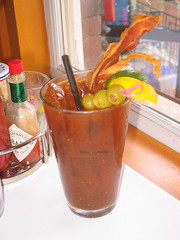 The steak and eggs, however, were. I’ve been to Tonic for brunch maybe 4 out of the past 6 weekend days, usually on my own, with a book. Catch it at the right time and the place isn’t too busy and the crowds are realtively sedate. This last time though, I was seated at the window and reading and a party of 7 was seated right next to me. I’m used to this as when Jenifer and I head out, we usually have children or loud parties seated right next to us, but this was the first time that the server ever apologized for being unable to seat them anywhere else. That felt nice.

I picked up some lemons on the way home and decided that I’d ring in the summer by making lemonade. The juicer made it much easier to annihilate some lemons and while it chilled I got quite a bit of work done cleaning up the kitchen and taking out trash all over the apartment. I still have yet to attack the fridge as there are more than a few forgotten leftovers and mystery jars at the back, but I might try to tackle that tonight when I’m doing a little laundry.

Sunday night Jenifer and I had dinner at the District Chophouse where we attempted to eat steaks nearly the size of our heads. Ok, not really, but they were big and oh so GOOD — I instinctively reached for the salt and she did the Mom thing, “Try it first.” Thank goodness she did, that steak was so damn good I leaned down and licked it, proving once again that there is not a single fine establishment that I won’t embarrass my friends in. We didn’t even have room for their chocolate cake, which is more than enough of a slice for 4 people to share, let alone just the two of us, so we waddled back home and I took out some frustrations in Paragon City wailing on bad guys.

The sound that best represents the weekend are some seriously good old (and new) school house tunes combined with the rumbling of Rolling Thunder going up and down 16th.