It took me so long to find out, what I found out 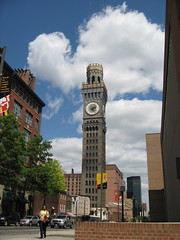 I love day trips. It’s something I miss about having a car. You didn’t have to make any advance or special arrangements. Just see that it was going to be a lovely day and get out on the road. I was slated to head to New York this past weekend, but that didn’t end up happening so I figured on a relatively quiet weekend close to home. I took in my house change and enjoyed the night’s rental from the redbox. I got a little time in playing online, watched some tv. Generally a planless weekend.

Gregory and I were chatting and he had to head up to Baltimore to scope out some properties for a client. These are brave and trusting people (obviously busy too) to leave this stage in the hands of their realtor. I tagged along and while it was a fun road trip, the homes he’d picked out were cute, but generally unsuitable for the type of person that would be comfy in them. A lot of these places, if I were 10 years younger, and had the money to buy and very few possessions and no need for a queen or king sized bed and no illusions that my friends would likely never visit me in the neighborhoods I was in… I could live in them. As it is now… not. But we had a blast driving around, his in-car navigation system is bossy — and we’re sure that there was one newly-built community that was interfering with nearby GPS systems since the car took us around in circles and we kept driving past it.

After the business was done he showed me where he used to live and we drove through some cute parts of Charm City. I really like Baltimore and will visit just about anytime anyone wants to head up. I love the fact that there’s nearly always a breeze, no matter where you are in the city. As it was such a lovely Sunday and still quite early in the afternoon he called up a friend of his and we went to sit outside for drinks and people watching at City Cafe. That is something I really miss. Sitting outside on a lovely weekend day and having cocktails in the afternoon. to watch the world go by. I think many places in DC are lacking that, opting for roof decks instead. Those are nice too, but I’d rather some outdoor tables on the street, getting hammered in the sunshine. Pure bliss.

I took the camera and got my usual fill of snaps of things I’d never captured on film before and it was really just a great day. I forgot to take any allergy pills so I was suffering by the time I got home, but the martinis might have reacted to the pills anyway, so I was probably better off.

Where to next, I wonder… Day/weekend trip to Philly?