Sam the Eagle can finally get a date! 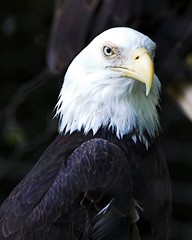 I could not have been happier to read “Bald Eagle Soars off Endangered List” this morning on the front page of the Wash Post Express. Here’s the link at the National Audubon Society: Bald Eagles Soar Back from the Brink:

The success is evident in the Audubon counts. Over a 40-year period from 1967 to 2006, bald eagle sightings have gone up nine-fold and increased an average of six percent per year every year. The top five states with the most dramatic increases were Ohio, Pennsylvania, West Virginia, Vermont and Michigan, which all had at least a 13-fold increase over 40 years.

I think the best part is that even though they’re coming off of the endangered species list, they’ll still be protected by federal and state laws. And with the eagle being such a national symbol, hopefully this will make people in America realize the benefit of conservation efforts.

It’s also nice to see something other than PH leading the news and I’m not alone in this, Mika Brzezinski of MNSBC tried to burn her cued up Paris report, then opted for ripping it up and shredding it. Now that’s journalism. Thanks to gamera_spinning for the heads up.