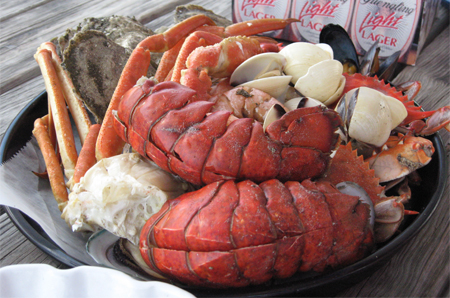 It really has been a summer of water, trips to Solomons Island, now Broomes Island and Parkers Creek and in a few weeks I’ll be on a cruise!

Yesterday Justin and I drove down to Calvert County again to show me where his parents’ place is, they live in Scientists’ Cliffs, a really cute community overlooking the Chesapeake Bay. On our way down, we stopped at Stoney’s Seafood House. Justin’s been talking about their crab cakes for over a month now and telling me that they would ruin me for crab cakes for the rest of my life. He may be right. These things were huge, and I had to hunt to find filler, perfectly golden, absolutely delicious, we could have probably been full on those alone, but he also ordered The Steamer. So much shellfish, I was ready to burst, but it was all so good! As the pictures show, we tore through it all handily enough, but we were feeling it for the next few hours. If there’s a seafood restaurant like that a bit closer to home, I am so there.

His parents’ place is adorable, not too large, with a deck and backyard about 30 feet back from the cliffs overlooking the bay. Justin and I walked down to the beach area and got out their kayak where we paddled to where Parkers Creeklets out into the Chesapeake to look for shark’s teeth, we only found 2, one tiny one and a nice looking one, but honestly the most memorable thing about that was the kayaking. He told me that Parker’s Creek could only be reached by water (I think he made that up just to get me kayaking) and his parents have a 2-person “fun” kayak that we took out into the bay.

I had given him very fair warning that I am not that athletic. The potential is there, sure, but it’s not exercised very often — pun completely intended. Needless to say it was going to be a rough ride out there, plus the winds were up, water was very choppy and I’d never been in a kayak before, let alone one made for 2 people. We had our life vests and our paddles and we set off — our approximate route. It took me quite some time to get my balance and the waves were not kind. We tipped over more than a few times… that is I tipped us over because I kept overcompensating for the motion of the waves, but it’s not easy! We got there eventually, I got stung a few times by jellyfish… another reason I warned him against this. I don’t fear jellyfish, I respect them, if they’re swimming, I stay out of the pool. And they were all over, not packed in the water, but they were there, and mostly little ones, so on one or more of our dumpings into the bay, I got tagged a few times, but the stinging feeling went away once I got dry. Still there were times that I could see them in the water and on the waves and it took a lot of focus not to completely freak out and dump us in again.

Oh and a special note to the bay: I hope you enjoy the Kenneth Cole sunglasses that now rest somewhere in your sandy depths. I’m coming for a return visit sometime in the future and I’d like them back, please.

Our return trip was with the wind and the water had calmed down considerably, so I would like some props for the fact that I didn’t tip us over, not even once, on the way back. But I gotta admit, I was exhausted. Even today my arms hurt, my legs hurt, I think I have blisters from the paddles (which Justin whacked me with when he was putting them back in the boatshed) and my back is still a little sore, but truth be told, it was a lot of fun. The water was very warm, and for the most part it was shallow enough to touch bottom even as far out as we got, so being tipped over wasn’t much more than a slight, if not hilarious, inconvenience.

We finished off the day with an extended soak in the hot tub on his parents’ deck before hitting the road back to DC. I swear if they ever need someone to housesit, I’d gladly take off a week or so to look after the place! Getting back home was a bit of a chore as something happened on MD Rte 4 around Dunkirk and traffic was halted, lanes closed, etc. When we got nearer to turn around and find another way home, we saw there was a big helicopter in the middle of the road, but I couldn’t see any signs of an accident. We headed over to Waldorf and got to DC from there. Back at my place we enjoyed some much deserved Mandarin Martinis and watched Wedding Crashers which, while predictable in spots, was still fun. I had no idea Will Ferrel made a cameo, and Vince Vaughn was… Vince Vaughn, same as any movie he’s in.

I’m still sore, but I got some cleaning done in the apartment today and much as I’d like to hit the store and make a big dinner, I think I’ll end up just ordering a pizza and resting up for the work week.