That Indelicate Thing You Said 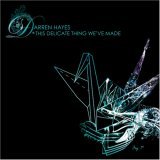 I was ripping Darren Hayes new album into iTunes last night and catching up on my RSS feeds when I saw the story on multiple queer news feeds that he was arrested for a racist attack. After my initial shock, I wondered first: They can arrest you for that now? and secondly: Is this like the reverse of the Isaiah Washington thing? I was also a bit surprised by how few details of the story were out, none of my feeds had any real information beyond “allegations made, allegations denied”.

Anyway, the album’s pretty good. Very pop, a lot of recognizable influences. I’m listening to it for the first time today (2 cds!) and I haven’t pinpointed any tracks that are going to become faves yet, but that will probably come when I’m at home doing chores and can really listen.

I got a little retail therapy out, though I’m not sure it’s therapy when it’s stuff you need. Swung past Aveda for lotion and shampoo, then Bed Bath & Beyond for an olive oil mister (yes Gregory, I finally got one), and linens. It was full of college students with their parents and there was a lot of overheard “I need one of those! — No you don’t. — But MOM…” I have been putting off buying new towels for so long, and now that I have, I won’t be able to use my old ones. They’re perfectly clean, and fabric softener keeps them feeling soft and fluffy, but it’s just a huge difference from new linens. I only picked up 2 sets, since I never have guests, but I’ll probably shop online for more. Nautica J-Class, sounds more like a car than a line of bathroom linens.

I did a little work on an outline for a series of posts I plan to make, but the text of which eludes me. I come up with bits of it in the shower, on the metro, while shopping or walking and I’m never near a computer or pen & paper at the time. Once I sat down and started jotting down notes, it turned into a bit of a large thing. Just as Rachael Ray isn’t a chef, she’s a cook (so says she), I’m not a writer, just a guy with a computer and a website that some people like to read. It may not even end up being that impressive, but so long as I like the end result it’s all good.