camp: No one really needed to ask the question…

That’s Will Thomas of Fox 5 News flanked by models showcasing Chip & Pepper’s new offerings. It was during a benefit for Whitman Walker held at Saks Fifth Avenue Men’s Store at Mazza Gallerie — more pics here. It was a lot of fun actually, the drinks flowed freely, cute little appetizers, but I felt horribly unfashionably dressed. Not poorly dressed, but Justin had meant this as somewhat of a surprise, so I had no idea where we’d be going.

I have to admit that I’d never heard of Chip & Pepper before tonight. Looking at their jeans, those things are clearly cut not only for white boys, but the kind of white boy models they were showcasing last night. Even at my slimmest, those pants would not be able to deal with my hips or my, er, booty. We also met and chatted with the local celebs, Will Thomas and Maureen Umeh from Fox 5. This is the 2nd or 3rd time I’ve seen and met Will Thomas and there really is no need for the “is he or isn’t he” question, but I’m not sure I can write any more about that without getting sued and I really don’t want Fox on my ass… but if they were, I’m sure Will would have no problem leading the charge, y’know what I’m sayin’? 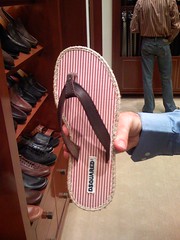 For a little bit of fun, guess how much these flip flops cost. Go on, have a guess. I think you’ll be surprised at the answer. Saks was quite the place for expensive, some might say outrageously so, attire and accessories. We were browsing $300 shirts, $2000 coats, but I have to admit some of those items were marvelously tailored. And the absolute best find, the one thing that still makes you do a double take when they tell you the price… But they tell you price first before letting you sample it, like they already know just how good it is… Clive Christian cologne: X. This stuff goes for like $350 or so a bottle, but the woman asks, “May I put some on you?” and I thought she meant like a little dab. Oh no, she gives my arm a generous spray, then pulls back my shirt and goes for the chest (cold! cold! cold!). After the icy tingles stopped, I took a smell, Justin took a smell, the two guys behind me who hadn’t even been paying attention to us both said “Oh my god, is that you!?”

…that’s what narcissism is all about, is looking in the mirror and going, “God, I’d like to have sex with myself!”

Seriously y’all, this scent was that good, I wasn’t quite in the mood to shag myself, but the scent was turning me on a bit. And it got comments from others that night as well. Now I’m not saying I’m going to run out and get a bottle, but if I ever had a few spare hundred bucks lying around, I might consider it.

All in all, it was a fun evening, I saw many of DC’s pretty gays, and some who prove that sometimes no matter how many labels you’re wearing, there are some people that even fashion can’t save! And after seeing those models, I really think I need to hit the gym… or at least get back to my fanatical 8-minute dvds.