That’s sort of what it felt like when Michael and I went to Macy’s yesterday for a bit of shopping. We were fine in the bedding/linens area, and no one approached us in kitchen/housewares. When we got up to the Men’s Floor, we couldn’t seem to move a few feet without an employee asking us if they could help us, show us anything, ring us up, etc. At first I thought it was friendly and helpful, but after the 3rd time being asked by the same employee, it was workin’ my nerves. 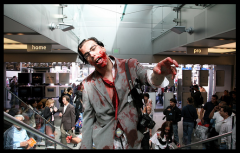 One gentleman told us about some CK workout gear that was being discontinued and was on huge discount. I appreciated it and told him so–in fact, I picked up a pair of the pants. But the same guy came over to me/us twice more to talk about some slacks he’d just put out that were also drastically reduced. I told him I wasn’t interested in slacks and politely excused myself to keep browsing. When he came by a third time to tell me about slacks, I was getting pissed off. At no time did he ask us what we were shopping for, and really as it was the third day of a holiday sale, we couldn’t really have had much of an agenda beyond general browsing and bargain shopping. Another guy was on about a 10-foot radius from his register and if we came nearby, it was like a proximity trigger. “Can I help you find anything?” “Can I ring those up for you?” “Can I help you find anything?”

I believe that I found it’s a small world less annoying. And I got stuck on the ride for ½ an iteration.

After I had a few good deals, and against my better nature agreed to apply for a Macy’s charge account, I asked Ina*–the woman ringing me up that had bugged me the least–what was up with this new pre-emptive strike stuff. When Randy and I had been in Georgetown the weekend prior, we noticed the same behavior in a lot of the clothing stores. She confided in me that she thought the new technique was intrusive, but it was a recent directive from–glancing upwards–board room level.**

Michael had gone off in search of 50% off Valentine-branded Godiva chocolate–score!–and when he returned, another salesperson attempted to nab him and ring him up elsewhere. Ina said, “Oh I’m helping him too.” The other salesperson got a little indignant and said, “I just thought it would be better than having the customer wait.” and she replied, “They’re together, it’s all right.” Then turning to us and muttering something about trying to steal her customer. The other salesperson walked off, telling us to have a blessed day.***

I realize that Macy’s is trying new strategies to keep up in this economy, but this new approach that’s somewhere between attentive and annoying just doesn’t work for me. I was approved for the store charge account, by the way, which was a shock to me and it came with a 2-day discounted shopping pass. So I’ll be heading by Macy’s again this evening, but I may end up telling someone off if the sales staff can’t keep their distance.

* I know her name because while I was going around, there was a higher-up employee reminding all of the sales staff to tell customers their names before asking if they could help.

** Points to anyone that gets that reference, which should be about 95% of the people who read my blog.

*** Seriously, can people stop doing that?