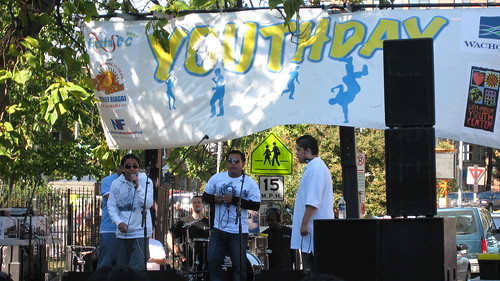 I was looking for something to watch this afternoon as the local Youth Day festival had sent me towards migraine and driven out all of my desire to go out to dinner. As I was clearing out things on the TiVo, I noticed the link to download a movie and remembered that I had a credit with Amazon Unbox. I settled on Superman: Doomsday since I was planning on adding it to my Netflix queue. It was listed at $.99 which seemed pretty reasonable for nearly instant access to a movie, and I didn’t plan on watching it for a while so I wouldn’t have to deal with skips and pauses while it downloaded.

First, Unbox. It works as advertised. I select it via amazon’s site or my TiVo unit that I’ve previously paired with the account, enter in my pin code and it charges it to my account listed with amazon. The pluses are that it acts like any other show I’ve recorded: it appears in my Now Playing list, I can pause it, rewind it, rewatch it, etc. The drawbacks are that I can’t save it to my computer or DVD/VCR, once I press play I can only rewatch it for the next 24 hours and the file will stay on my TiVo for a month. The quality was great, at least, but the file wasn’t closed captioned at all, which is a pretty big oversight, in my opinion.

Superman: Doomsday was fairly adequate, it’s no wonder that it was straight to video. The style of animation is a bit coarser than the regular DC Animated Universe offerings and the voice actors were more Hollywood than the standard “unknowns” that worked on the cartoon series. Honestly, I was already done with it when I realized that the opening voiceover was supposed to be Lex Luthor, but it wasn’t done by Clancy Brown. It’s quite a departure from the Death of Superman story arc, there’s Doomsday, a relationship between Lois and Supes and a clone, but no Hank Henshaw, no Steel, no Superboy and no Eradicator. There’s not much else I can say without spoiling it, but a lot of it won’t make any sort of sense except as a story in its own right. One thing that really bothered me was that Luthor’s outfit didn’t change throughout the entire movie, and due to a lack of art direction in that area, he was seen wearing white to Superman’s funeral. It’s worth adding to a rental queue, or checking out on PPV (for under $2), but I wouldn’t buy it.

There’s another street festival tomorrow in Mount Pleasant, but generally they use a much more balanced sound system so that windows in a 5 block radius aren’t shaking from the bass.