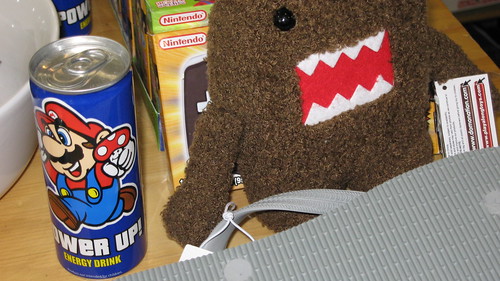 I got something this weekend I rarely ever get, and then something else that indicates hell must have frozen over: a busy Sunday out and a date. Not too much to say about the latter, really. We met over at Eastern Market and walked around a bit, grabbed coffee. Just talking since we’d sort of compressed it in the middle of stuff we had to do, but it was still nice.

I knew Sunday would have something going on when I woke up and saw that it was really warming up outside and the sun refused to be denied by this wishy-washy winter we’ve had. After giving the guy a call and leaving a message, James IM’d me about brunch downtown at Austin Grill. I was a little skeptical since the past few times I’ve been there it’s been slow service and sub-par food. Not at all like their Old Town Alexandria location which is just plain fun. Even the Silver Spring one isn’t so bad, but the Penn Quarter/Chinatown location has never seemed to get it quite right. Still, it’s easy to get to and it wasn’t too crowded around 1pm. I met him, Kimberley and Vincent and we had a nice enough time. Our server was unintelligible and slow, the food was passable but could have benefited from better timing in the kitchen, and a bloody mary and margarita were both deemed drinkable but that’s about it. In the words of Peter Griffin, “I found the meal shallow and pedantic.”

Afterwards we hit Teaism and Urban Outfitters, then walked to Barnes and Noble where we parted company as I walked to the metro. It looks like today will be more of the same type of weather, so I may have to come up with some suitable after work activities. Something glamorous like shopping for socks. 😛 I’m running out of white sport socks because I wear them around the house too much and totally wear them out. And I never have a high enough rotation of dress/work socks, so it’s time to add more. Though I often feel like it’s time for a scorched earth approach and completely tossing out all old socks in favor of new ones.

I got a bit geeky on Saturday, turning my Wii into a pseudo-media center. A Lifehacker post detailed how to use Orb on your home PC to share out music, pictures and video and then browse to it using the Wii Internet Channel. The interface isn’t perfect because browsing without at least a keyboard is a bit clunky, but it does work. I was streaming music and audio books through the stereo in my living room where before I’d have to risk ruining PC or laptop speakers to have music in my whole apartment. Watching videos was a little clunky since it transcodes them to flash video on the fly, but I have lots of other means for watching video in-house.

Another thing about Orb that only occurred to me last night was that since the Wii was browsing to it via the internet and not local network, I could probably use it from other machines on-the-go. And I am, right now. I’m in a bit of a retro mood today so I’m listening to the For Hi-Fi Living series. My workspace kinda sounds like an elevator or old-school department store, but I love it.

In other news, NASCAR ruined my FoxToon watching last night (though was pretty in HD) and the one barista really has a mental block when it comes to making my latte. She wants so hard to be able to remember it and gets it wrong every time. However, today was the first time she actually made the wrong drink and handed it to me. *blegh