food: What a crock! 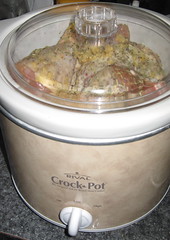 I’m not sure I’ll ever forgive Norman for sending me one of his cast-offs, a 2-quart crock pot, or as the more refined say, slow cooker. Yes, I know it says Crock Pot on the damn thing, but I’m trying to bring a little culture up in here, ok?

Hm, got called away for a few things around the office and completely lost the plot of where I was going. But it was going to end up with asking people for crock pot recipes, I know that much. So far I’ve managed to throw in a mirepoix under some chicken parts and come up with a fair effort of chicken and veggies when the meat held together, and the second round turned into more of a chicken soup when the meat fell apart. I actually added noodles to the second batch and enjoyed slurping away at the cure for the common cold a few nights in a row.

From what I’m told crock pot cooking is simple and easy, but it’s so not my style. There’s a level of preparedness to it that I generally don’t have. I’m fine running by the store on the way home and throwing something together in, dare I say it, 30-minutes. And while it was nice coming home to some simmering chicken and veggies, making sure that I was up and tossing raw parts into the pot (before my shower of course–chicken hands) before heading out felt like a bit of a pain. Still, I’m seeing a lot of options for slow cookers, I just need to find some fun recipes. Also since he sent me a little mini-pot, I’m still evaluating it before I decide to buy a larger one on my own. The small one makes great serving sizes for one person, but it would never fit a whole chicken or decent sized roast.

So feel free to tell me where I can go and just where I can stick it… Answers in the form of a crock pot recipe, please.