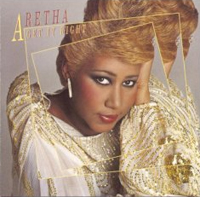 I barely pay attention to the screen when I set Pandora, actually its mashup cousin Pandora.fm, to a station and let it go, but some of my recent choices have been pulling up really old school tunes. While switching tabs in Firefox I took a look at what was playing and saw this album. The mind boggles. But looking at the album cover, it’s a very typical style of the “what I sang was called ‘soul’ and now it’s ‘r&b’ and I’m still here!” divas making their forays through the 80s. And what a fun time that was… an era so fun that we barely ever emulate it because that wasn’t kitschy, it was just embarrassing!

I’m not a fan of financial gurus because it seems like one of the way they manage to keep making money is by maintaining the mantra, “anything for a buck.” Like the new Hyundai commercials where the financial experts are not exactly advising people that they should buy a new car, but talking about what to do with the money they’ll save buying one. Excuse me? I don’t ever recall seeing “buy a new car” on a list of financial do’s, however I’m sure that “get paid for a Hyundai ad” must have been on it. Still the one I do and don’t like because his book titles are both honest and caustic is Larry Winget. He did make a very true statement in a recent interview, however:

Overspending is the culprit. Four dollar a gallon gasoline isn’t as much of a problem for middle America as a four dollar a cup coffee. People are not willing to modify their lifestyle in order to live on what they earn – that is the real problem.

— All Financial Matters: Larry Winget on the Housing Crisis

Kinda hard to argue with that… except that this is still the man in the commercial sitting in the back seat of a Hyundai practically daring the driver to argue with him about his advice to buy the car and invest the savings. Bit of a mixed message, no?