I can’t say for certain whether today will be a good day or a bad one. I got up a wee bit later than usual as I was having a dream that contributed to me thinking I’d gotten up when I hadn’t. Managed to make it up and out the door ok when I realized that something wasn’t quite right. I started my check, as I do, from the top: bag, necklace, collar stays, belt, badge, keys, wallet… And then I realized, even though it isn’t on my checklist, that I’d left the apartment without any shoes on. I wonder how far I would have gotten. 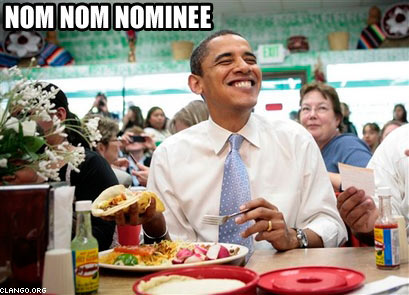 I was playing video games last night and keeping my windows closed due to the impending tornado that seemed ready to rage outside, but even so I couldn’t keep from hearing the news. As Doctor Who says, “Not impossible… just a bit unlikely.” I can only hope that this is a sign of more improbable things to come. Hm, GM did say they’re making the shift to producing smaller cars and that “the S.U.V. era is all but over.” Maybe things are finally shifting away from a nation mired in the expectations and entitlement of the past and moving towards the future at last.

It’s too hot out, everyone on the metro looked wilted. And as DC approaches Summer, the rain doesn’t help relieve the humidity, just seems to make it worse! 😳