to relieve stress or renew vitality… 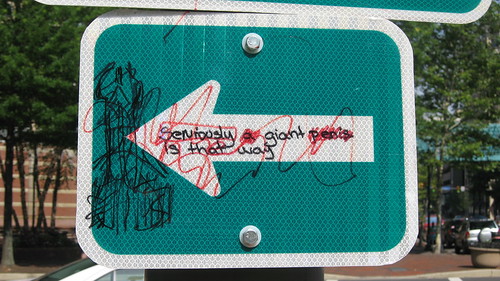 Not that the weekend wasn’t pretty relaxing, aside from Friday evening where the local fireworks were still going off until well past 2 in the morning. Loud, screeching, window-rattling fireworks. I admit that I’m not really up on the trappings of the holiday, and I think big arranged/ choreographed fireworks shows are great, but why are we letting average citizens buy them to shoot off in city streets and why were the cops not doing anything about it? The “celebrations” in my neighborhood were going on well past the time that it would have taken to corral tourists back onto the metro.

Saturday was a bum day. Plans for a picnic fell apart in the face of too much rain, so I snacked on some of the eats I would have made for the picnic and had a bit of wine and watched a lot of Torchwood and Burn Notice. I’m enjoying the latter show… a bit, but it feels a lot like shows from the 80s with a little kick to it. The episodes are such that you barely care about the main character’s running plot and the “fixed in 30 mins” plot takes over. They’re fun, but watching them back to back would be like subjecting myself to a marathon of Hart to Hart or Scarecrow and Mrs. King.

And on Sunday, I cleaned… a lot. There are bits of floor visible that I’d forgotten existed. Having Wimbledon on was distracting, but I still managed to get a bit done. As I said on twitter, “One day they’re gonna open Federer up and find out he’s a robot. And then I shall order a dozen of them.” But it was a great match, and the rain breaks gave me perfect times to take out more trash. I don’t really know how I accumulate so much junk, but I’m recognizing a lot of it is single-use. Items that aren’t even intended to be so, books and dvds that I’ve maybe read once if at all. They just pile up and now I’ll have to donate or sell them off. I’d write to one of those reality shows, but I’ve seen the people they help tidy up and I’m not that bad. I do have to get a handle on it though otherwise it’ll never stop, and then where will I put my Rock Band Wii equipment!?