theater: “Without You, I’m Nothing” 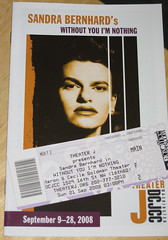 Yeah, I don’t buy that for a second. Justin sent me a message on Saturday to let me know he’d snagged me a ticket to see Sandra Bernhard. Sorta for my birthday, sorta because he knew I’d want to see her. After the matinee show he was speaking on a panel about HIV/AIDS in DC, so they offered some free tickets to WWC people–and I got to tag along.

Sandra was both fabulous and brutal, she really doesn’t like Sarah Palin and makes no bones about it… even though some others have. The Theater J blog has a few stories about the show and the controversy. She mentioned that the Right were sending in spies to check on her show, but it seems like they read a review of one particular joke among the whole 2 hours and went rabid over it.

Additionally, I saw one of the most extreme occurrences of heckling ever–especially for having no booze served at the show. Sandra was starting to have a go at Joe Lieberman when a woman in the audience shouts, “Shame on you!” It took Sandra a moment to hear it through the applause, but she responded to the woman who also called her an anti-Semite. At first Sandra was willing to give the woman her 15 seconds and she was responding with a sort of angry-rationale to the ranting, but eventually she invited the woman to leave if she didn’t like the show. After the woman and her husband left, Sandra figured that she must be a season ticket holder who thought she was coming to see a nice little Jewish girl tell some very funny jokes. Wrong!

The show was a lot of fun though, she sang, told jokes, talked about her family and upbringing. She had an amazing riff on how she first did the show in the 80s and how much she missed that era. I’ve never seen her live before, back in the 80s, we got a bootleg copy of her show and passed it around school on cassette so this was a real treat. As Lindsay commented, I do need to get out to more theater events, but I also need to find people who are interested. And by interested I mean not only being receptive to the call about the ticket buy-in, but also making that call as well. I’m not all that keen on going by myself, but I’d rather do that than constantly buy an extra ticket and try to find someone to both use it and pony up for the cost. I did that last year and every single time it went poorly between scrambling to sell it at the last minute, or friends saying they were interested when they weren’t.

First day of Fall today and I’m looking forward to light jacket and sweater weather. Time to hit Yankee Candle for those harvest scents and break out the rolling pin to make some pie! Ok screw that, cheesecake, but practically the same thing… really! 😉