We don’t need a bowling alley, we need a skating rink.

From Kris’ entries on his trip to Austin City Limits:

Erykah Badu loves to talk… My favorite part of her ramblings, though, was when she advocated overthrowing the United States government.

OK, that’s the kind of gross simplification many public figures complain about, but tell me, how else would you interpret someone who told you we needed a whole new system? But that’s not the best part of Badu’s talk. The best part was when she likened the electing of the President to putting a new manager in a bowling alley, except you see we don’t need a bowling alley, we need a skating rink. And what miracle-working manager is going to pull that kind of transformation off? Fucking bowling alleys. 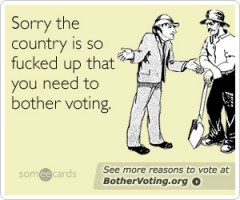 Honestly, it’s just nice to see a celebrity that isn’t telling us who we should vote for. That overthrowing stuff is a bit much, especially since most days Erykah is pretty much rocking the Black Panther/revolutionary look anyway, but I’d still pay to see her.

I’ve been asking around about the early in-person/absentee voting in DC and haven’t gotten too much feedback yet. A DCist article says that lines may be long, but they’re going to be long on election day too and my polling place is right across the street from my apartment building, so I guess I’ll take my chances. What I don’t understand is how many people at the office are scheduling meetings on the morning of the 4th. I might actually wear my “I Voted!” sticker this year just to stop them potentially asking why I’m late.