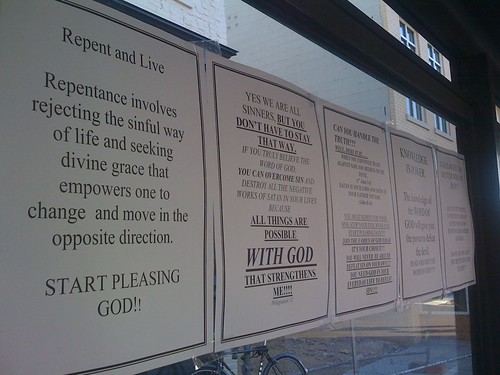 I have mentioned before that I’m like management poison? Hmm, yes I have, sort of. Our team used to be huge, then it shrank right around the time that the contract was going through layoffs, so it was a “good” thing that people were leaving. Still, we’ve been running on a reduced team size for a long while and when my friend and co-worker–and now mother of two adorable kids–Betsy is out, I’m in charge. We already know that I don’t like this, but I also seem to be cursed. Anyone I interview/hire/break-in during that period? They’re gonna quit. And usually do it in a spectacular fashion that causes even more work after they go. Not the obvious one less person equals more work kind of stuff, but all the forms, red tape, paperwork, etc. Such a pain. This should be a lesson to our bosses: don’t leave me in charge!

But maybe it’s me. Maybe I really need to Start Pleasing God!!