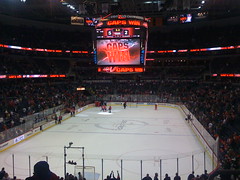 As Natalie says, “I love tickets!” So when Michael had an extra ticket to the Caps game last night, I put my name on the waiting list. I’m not usually a sports guy, and I haven’t been to a hockey game since I was a pre-teen, but going to a live sporting event is so much different than sitting around watching it at home. You tap into the energy of the crowd and it really gets you going! Another reason I wanted to go was that it was Dollar Dog Night, and I love me some hot dogs–arena dogs especially, it’s like sports haz a flavor or something.

We met up over at ella’s for a few glasses of sangria, then made our way over to the Verizon Center. I hadn’t been in there since it was the MCI Center and I think it was to see a Mystics game. A wonderful co-worker of his has season tickets in a great section, we really had a good angle and view of the rink. We got to bypass the normal rabble and sit instead with the rabble that had the foresight and patience to get season tickets. It was a little similar to the Nats game I attended in July, a lot of sensory overload. Ads around the arena were synchronized with ads on the big board, constant organ music, weird cutaways during the tv breaks for the dance cam and smile cam and the mascot bringing in food from Papa John’s and Chipotle. The guy in the seat next to me really didn’t like Chipotle. As the mascot was tossing out burritos he yelled, “How about you throw them some government cheese next!?” Though his concerns seemed less about class and more about what gas the ass may pass as he also said, “Have one of those and you feel it all week.”

It was fun though, and I wasn’t sure I’d get all excited but hockey is such a build up, there are so many moments where they almost score and your adrenaline peaks and falls a bit and so on. When the Caps scored their first goal, I was surprised to find myself leaping out of my seat and shouting my head off. Aside from a few questions, the game was easy to understand and some stuff just seemed too cool, especially when the players change out on the fly. It should be a big mess, but they pull it off nicely and somehow easily hop over those walls even in all that padding.

Oh yeah, and there was many a hottie there. Heterosexual, beer-drinking, hockey loving dudes, but hotties nonetheless. I was on the lookout for bromances, but didn’t seem to find any, and after a while my head was in the game or on the dogs anyway. 🙂 And while I can’t seem to find them online, those Caps take some very nice PR photos. The JumboTron made sure to let us know that these boys clean up very nicely.

If an opportunity to see a game came up again, I’d definitely take him up on it. Live beats Memorex any day.