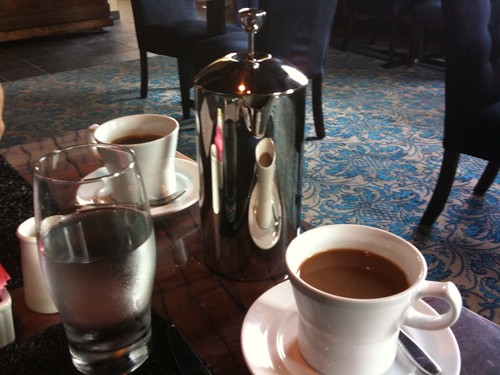 If I had the time and could find a coffeehouse that offered this, I’d be happy to delay my start time at the office for a little sit down and a nice cup of coffee. Being french press, this did have that layer of sediment at the bottom… but I’m getting ahead of myself.

On my trips out the the scary and wild suburbs of Clarendon, I’ve seen Eventide coming together over the past few months. The menu looked good, though I couldn’t discern any overwhelming theme or signature to the dishes. The website blurb doesn’t offer much either:

[Executive Chef Miles Vaden] is passionate about the quality of his ingredients, and he has a deep appreciation for regional cuisine and locally available products. His cooking style embraces traditional methods as well as the latest technological advancements–whatever helps him bring out the most flavor is what has a place in his kitchen.

Seems a bit generic, as regional/local are becoming more of the norm. So, no underlying theme, but I like the part about flavor!

James says their brunch times have moved around since opening and I could see a difference between their posted signs and their tacked up menu out front. Seems like they’re now from 10a-2:30p which is a good time to grab the earlier risers but seems like that might end a bit early for the DC brunch crowd. Still, this is Clarendon! 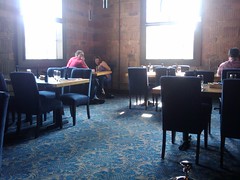 We were going to try the rooftop deck, but unfortunately the tables had no umbrellas or shade. Sitting in the direct sunlight would have been all right for me–for a while–but James likely would have burned to a crisp, so we ate in the 2nd floor dining room. They have three levels and my co-worker let me know that each one seems to have a different theme between casual dining, a little more upscale and more party’ish/nibble’ish on the rooftop. The 2nd floor felt a bit cavernous, very high ceilings, but a lot of light. Even so, the noise of other tables was very muted in the space, so unlike a lot of DC brunch places, there was no need to yell across the table. 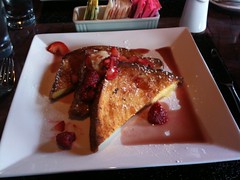 After perusing the menu and enjoying our coffee, I opted for the Brioche French Toast and James got the Bison Sausage Omelette with both of us ordering the Parmesan Grits as a side item. My french toast was yummy, though smaller than what I’ve gotten at other places. It definitely had the right mix of custardy and crispy. I’m usually a “more syrup, please” kind of person, but between the fresh fruit and homemade syrup on the plate, it was plenty. 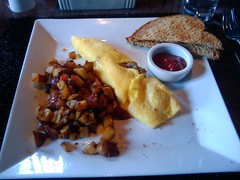 James’ noted that his omelette was good, but the potatoes were kinda greasy. After snagging a taste, I agreed. They weren’t very browned, so I was thinking they cooked at too low a temp and sucked up too much oil. The grits were tasty, but suffered from the classic grits conundrum: not enough salt. Grits are just something that need to be cooked with salt, if you don’t do it while cooking, they’ll never be salty enough when they’re served. The cheese flavor was strong, but not enough to overcome “plain grits” flavor.

Service was great, dress was casual and no reservations were needed. It came out to about $18 per person, which is pretty reasonable for a non-cocktail brunch. Portion size falls short when compared to some of the other local brunch offerings, but after the french toast, I did have trouble finishing my grits. Small(er) portions aren’t always a bad thing!

I’d like to head back for dinner sometime and maybe snag a rooftop table around sunset. Eventide is definitely a keeper.