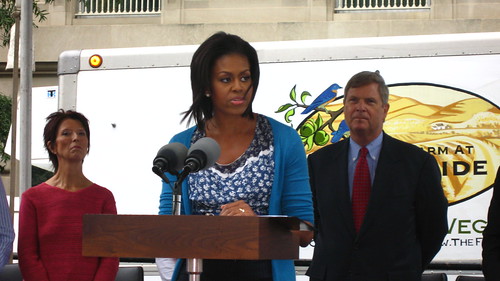 So, yeah.. how was your Thursday afternoon? I can’t even try to play it cool, Shaw Girl and I went over to the opening of the new Farmers Market by the White House* and when Michelle took the stage, we both squee’d**.

There’s a great recounting of it over at Adventures in Shaw, I’m still pumped up from not only being less than 15 feet away from Michelle Obama, but after her speech was finished, she came down to the crowd before doing some of her own shopping and I SHOOK HER HAND. It would have been one of those “I’m never washing this hand again” moments, except for this amazing lavender soap from Welsh Gardens which made my hands feel as soft as Michelle’s. *sigh* 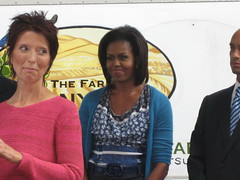 There were a lot of DC foodie bloggers & twitter users there, but I only managed to meet Thrifty DC Cook. We also spotted Jose Andres while waiting to get through security.

Since I’m currently trying to get stuff out of my house and not the other way-round, I didn’t buy a lot, just a few things from the Lavender farm, but I’ll be back. And frankly, with my current and new place to live, this market isn’t the most convenient to me so unless there are vendors there with products I can’t find anyplace else, I may not be back all that often. Penn Quarter and 14th & U are my main markets. Though I understand that I’ll be getting one near my new place as well, whenever it finally opens.

Of course I took tons of photos*** and a bit of video. One of my favorite moments was when she was talking about all the Federal employees that would have access to the market and one of the agencies didn’t get the best response.

It’s not every day that a farmers market is opened by the First Lady, though 14th & U had a close second last year. So I know that a lot of people were just there to see the FLOTUS, but many of those people stuck around and were impressed by the offerings. I’d like to think that the “famous person” draw made a few new farmers market fans yesterday. Personally, I look forward to the move being over and done with so I can get back to cooking. Living on nuked Healthy Choice is no way to live at all!

* Everyone is and likely will be calling it the White House Farmers Market, but that’s not the official name.

** Subsequently losing all of our street cred†.

*** And yes, the cheese wasn’t the only thing I found delicious at the FireFly Farms booth. 😈