One thing I’ve been hearing since moving to a city with a–more or less–proper Chinatown is “Where can you go for good dim sum?” And as it was well before my out and about knowledge, I had no idea, but I knew what people were talking about was the classic concept of the on-cart, a la carte dim sum, pointing and ordering on the fly. I’ve been to places in the area that served dim sum in the area, meaning either small plates or many types of dumplings but not on the carts. 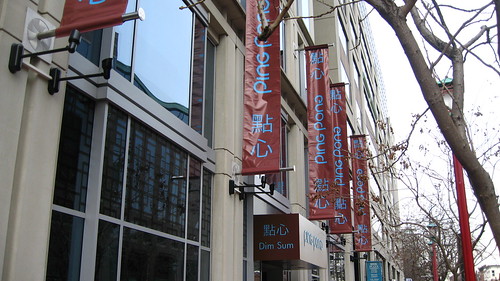 Ping Pong Dim Sum is one of DC’s latest international imports, with restaurants already in London, Brazil and Dubai. Their impending presence had been known for a while, but a fellow foodie friend and I walked past a week or so before their opening and spoke to the manager about the place. My friend reported seeing them training their staff each night as she headed home from work, so after our conversation, we were looking forward to giving them a try.

This is a restaurant with an active social media presence: @PingPongDC, so they had already been responding to a few of us on twitter. Those in attendance were @Shaw_Girl, @floridagirlindc, @MangoTomato & @urbanbohemian (me).

It’s a wonderfully designed restaurant, definitely striking notes of “asian modern”. You’ll want to check your coat as the chairs have no backs! A nice combination of oblong and round tables in the dining room seemed to give the servers an easier time making it around the restaurant. We were there for a 12:30 lunch and the place was busy, not crowded. Not too noisy, or at least not so much that we couldn’t hear our own party and the server–though she did have to speak up and lean in a few times.

Their menu is a good balance of dumplings (baked, steamed, grilled and fried) and other options including salads and signature dishes. Definitely some non-salad options here for vegetarians. Our table went with the three set menu options, Seafood, Vegetarian and the “Dumpling Fix” containing a nice sampling. Similar to sushi, you have a piece of paper with the menu options and you mark how many of each that your table is ordering. As the servers come round with your dishes, they confirm it and drop it off. That is primarily because the items may come out in any order and they most certainly did–at times confusing our servers!

I’ll preface this by mentioning that they had been open for just over a week when we had our lunch. I say that because while the food was good, they still have a bit of work to do to get into their groove. Three dishes were brought to our table that we didn’t order, the first of which was described so lovingly by the server that we thought it was an amuse-bouche! Thankfully none of us tucked into it before he returned and admitted his mistake. After the third mistaken item arrived, we’d pretty much resolved that whatever hit the table next would be claimed regardless.

When we did get our items, there was a little confusion–since we’d all ordered set meals–as to which dish belonged to which diner. We did sort it out, more or less, but it turns out that we may not have been 100% certain about what we were eating. I say this, not as a foodie but as an ignorant American: I could have used a legend similar to the ones appearing in Whitman Samplers. Even though we suspected while eating, that we might have been served the wrong dumpling platters, a second look today at the menu and my photos seems to indicate that we got the right items.

I don’t have any physical or ethical food allergies, so it didn’t bother me except from the consumer’s standpoint of getting what you ordered. Obviously the restaurant and servers are still a little green, but as many of the dumpling items look the same, a little education as to what filling was in what dumpling would have immediately made it clear whether we had the correct dishes or not. The more I think about it now, I believe it was strength of flavors that gave us that thought more than anything else. As delicious as everything was, there was very little distinction of flavor from one dumpling to the next and anything with seafood (prawn or scallop) in it, overpowered the entire dumpling.

Even so, I will visit again, but I’ll be more careful about what I order and ask more questions when it arrives. Once they start having a happy hour, I suspect the place will be very popular. The options on their drinks menu are quite varied. The ones we had showed a great command of mixology with fresh ingredients and creativity. If they combine those drinks with some happy hour food/drink special prices, it will make the perfect after-work spot. They told us there are plans for both after-work and late-night happy hours in 2010, so I’ll keep an eye out, but for now I’ll give them another month or two to get settled into their new home.