health: it’s not a tumor!

Just back from the doctor and turns out it most likely isn’t anything weird or crazy, but just some fancy-pants scarring–keloids. Turns out my head whackery of last year is having longer lasting effects, but at least it isn’t anything to be too worried about.

My visit was pretty good considering some customer service horror stories I’ve heard. I got over there a bit early, found that they’d filled out most of my new patient form based on my initial phone call–she did ask for a lot of relevant information–and a nurse saw me earlier than my appointment time. After the mortifying weigh-in among other basic info collected, I sat down and fiddled with my phone while waiting for the doctor. 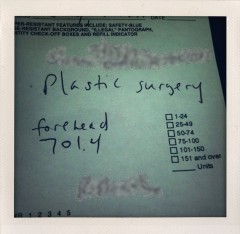 After a few questions about my habits, checking my breathing and medical history, he prodded and tapped at my lumps. I related the circumstances and his diagnosis was keloids, with a recommendation to “send [me] to plastic.” This was the first thing said that I didn’t understand, until I looked at the prescription sheet later and realized he meant plastic surgery.*

There was a bit more waiting around while I paid for the visit and their staff called around to find a specialist in plastic surgery–and I think for PoC as well. He’d also booked me in for blood work, so I flipped through the latest CB2 catalog and dreamed of furniture I should not be spending money on until they called for me. 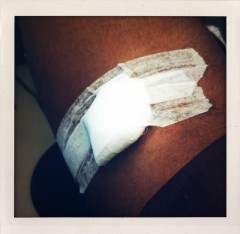 It’s been a while since my blood’s been taken, and as I sat down I told the woman that difficult-to-find veins are pretty typical thanks to my mother’s side. And she did poke around at my left arm for a while, unable to make contact with one. After enough of this–it was starting to sting–I asked, “Care to try the right arm?”** She found a good spot quickly, thankfully. I don’t know if being right-handed had anything to do with it, but she didn’t make mention of which arm is best to try before she started. Good thing I don’t suffer from trypanophobia or I might have lost it… or passed out, which probably works just as well for them.

We made a little small talk while the lifeblood flowed out of me, and then I was done. All in all, a pretty painless experience. They weren’t rude, didn’t talk over my head or talk about me as if I wasn’t in the room. I might still see about getting on the patient roster of the doctors my friends recommended, but as a nearby spot to get treatment, it wasn’t too bad. Now I just have to call up the referred specialist and get in to see them. The saga continues! Oh, and since it’s a form of scarring, the knife fight, “you should see the other guy” and any other stories proclaiming my valor as opposed to my clumsiness are still valid.

* It turns out that I was jinxed after all. I will be the next one in for surgery.

** Subtext: Please stop digging around in my arm with that needle and try something else.