Been a bit busy lately with dealing with the move, and stress from work & the holidays and dealing with health matters, so bear with me… updates are coming. I wouldn’t keep all… four* (?) of you waiting too long to hear what’s been happening with me. 😛 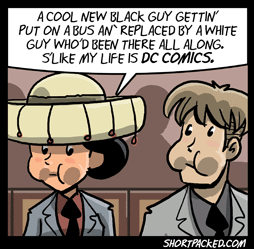 Just some quickies this morning from the comics. I used to be devoted to my morning webcomics, first thing in the morning at the office, sometimes even before getting my coffee, I’d open up about 20 tabs in Firefox of comics ranging from those in the daily newspaper to the obscure ones about fantasy and gaming. Most of them were geeky, written by geeks for geeks and I wasn’t complaining. Those days are long gone, but some still manage to filter through the office tasks.

Today’s Shortpacked!–ostensibly a comic about a toy store and its staff–kinda nails DC Comics’ recent actions. Not exactly retcons, but as Chris Sims at Comics Alliance calls it: regressive storytelling. This specifically refers to plots that remove–usually by death–the classic or “one true” character, replacing them with a newer hero, more recently branching out ethnically when they fill those new roles. Those plots are then eventually wrapped up or reversed by bringing back the original character and as Shortpacked! puts it, putting the replacement on a bus. It’s the kind of last-panel, out of left-field humor that the artist/writer is known for and it gave me a good chuckle.

Doonesbury also surprised me this morning with a not-so-subtle commentary on Don’t Ask, Don’t Tell–which has already got the GoComics comment threads poppin’. Trudeau’s support for our troops is no surprise, but this is one of the first strips I’ve seen where he makes mention of DADT.

I should make a resolution in the new year to keep up with–and catch up with–more comics. I’m open to suggestions if anyone has any good strips they follow. And remember, just 10 more shopping days until Christmas… just sayin’!

* I realize that estimate is probably a bit high, but I have to keep up appearances.