books: Go the F**k to Sleep

The much talked about–and pirated, apparently–book, Go the Fuck to Sleep

is now available on Amazon. 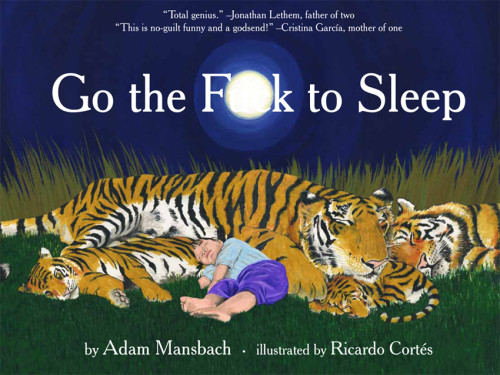 Cleverly masquerading as a children’s book, it’s clearly for the exasperated parent to have a good laugh with and perhaps give as a gift of commiseration to other new parents. From the number of YouTube videos and illegal trades I’ve seen, I don’t know that any non-Twilight or Harry Potter book has eve been this anticipated.

As a pure “icing on the cake” move, there’s also an audio book, narrated by none other than Samuel L. Jackson… and it’s free from audible.com*:

There are also rumors that Werner Herzog will also narrate one, here’s a taste of how awesome that may be.

There are plenty of YouTube videos that have combined both the narration and pages from the book, but as those are probably on the “less than legal” tip, here’s footage of Jackson reading some passages from the book.

Having read through and listened to the whole book, it’s good, but definitely feels like a novelty item. It’s got the classic look and feel, but it’s clearly not meant to be read to children and when the audiobook version is only about 6 and a half minutes, it’s a good sign that the book will need some re-readability lest it occupy shelf space** and be brought out during book club or dinner party nights. Still, at $8 for the hardcover or $5 for the Kindle version, who cares if it’s only good for one or two read-throughs?

I don’t have children, but I was definitely one of those “I’m not tired!” kids, so I can relate. And I now know what I’m giving the next new parents… or even puppy owners.

* You will need an audible.com or amazon.com account to add the audiobook to iTunes.