gallery: X-Men – Days of Future Past 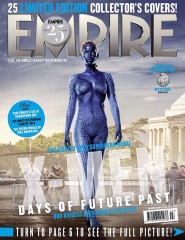 Empire Magazine has an exclusive cover gallery featuring 25 covers devoted to the upcoming movie “X-Men: Days of Future Past”, calling it “the biggest ever superhero movie”. Now while I’d be lying if I said the geek in me isn’t really looking forward to this movie, even though they’re pushing it as a Wolverine/Xavier/Magneto vehicle, I still have enough of a comic-book geek’s cynicism about it to be very wary. Much like a Phillip K. Dick story, I’m not really fond of Hollywood turning a very short tale into a 2 hour long movie. The “Days of Future Past” storyline was just six issues of the X-Men and was a really simple story that was easily wrapped up.

This movie seeks to somehow combine and resolve the timelines of the X-Men 1/2/3 films, possibly the Wolverine films and X-Men: First Class into a single story and that’s a really tall order.1 They’re also changing some basic elements of the original story just to fit it into the movie-verse. And unfortunately this has to happen outside the other very tightly-controlled Marvel Studios cinematic universe which has done a great job of keeping everything somewhat making sense between the movies.

I’m not looking down on it yet, and so far the marketing is both pretty and tight, but I do worry that with so many characters in the film, there won’t be much time for character development and honestly… that a lot of them are just gonna die.2 We’ll just see what happens come May!

1 At least I think that’s what it’s going to do, but I tend to stay away from spoilers, hype and early anything.

2 Especially the ones in the “future”. Seriously, read the comic.