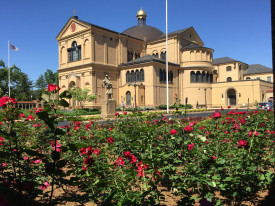 It’s pretty common that when you live in DC for a long time, you tend to take its sights for granted. Smithsonian? Seen it. Monuments? Yeah, sure. White House? Walk past it all the time. And even the sights you’ve never been to, you’re at least aware of. I’ve yet to take a National Cathedral tour, but I know it exists. So it’s rare that there’s something practically in my backyard (more or less) that I’ve never even heard of before.

Yesterday was a friend’s birthday, and after a nice brunch, we headed over to Brookland to see the public gardens and grounds of Mount St. Sepulchre Franciscan Monastery. It’s a fairly easy walk from the station, but there is parking for those of you weirdos with cars. It’s situated in a suburb-like area, while walking there we passed a piece of Rock Creek Park and some lovely homes and then all of a sudden, boom, monastery. And it’s a very spiritual area as other nearby houses were also either religious retreats or housing of some sort. 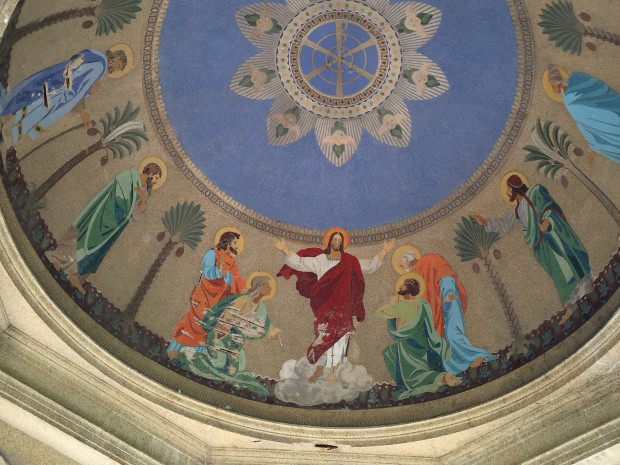 If you’re looking for a peaceful and easy escape from DC, this is as good as it gets. The grounds are full of rose bushes of every variety and there’s a lovely walkable garden where they have replicas of The Ascension Chapel, The Grotto of Lourdes, The Tomb of the Virgin Mary and The Grotto of Gethsemane–I could not stop trying to pronounce ‘Gethsemane’ to myself for at least 5 minutes. 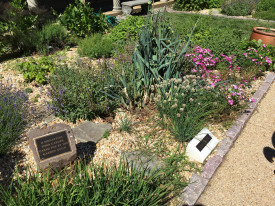 It won’t take long to traverse the garden and the grounds, but try to pick a nice day so you can linger and take it all in. There’s a covered corridor surrounding it, so easy to duck in from the sun if it’s too hot. I’m going to have to head back around Easter when there is said to be a great display of tulips, but at the least I’ll want to go ahead of Spring to see the best of the roses. A lot of the flowers had already given it their all and were starting to fade. Still a lovely trip though and so close! Another unexpected treat was a very large herb garden featuring four categories of plants: culinary, household, medicinal and biblical. I’m going to have to look up that last one, but seeing it gave me hope and inspiration for my own little garden on my patio.

It may not be “blocks away from the White House”, and it doesn’t really have enough to qualify as a day trip, but I’d definitely add this into my “what to do in DC” rotation, especially if I have visitors coming and they’re sick of the Mall and museums.