I haven’t really been all that fired up about Pope Francis’ visit to the US. Mostly it manifested in the form of multiple alerts from DC and the Federal Government about street closings and office closings and potential metro train and bus delays. Which then resulted in co-workers losing their everloving minds over how they might or might not get to work and whether or not they’d be allowed to telework.1

Honestly, it wasn’t that bad. Which is what you usually find for closures and events that aren’t weather related. Getting to work was easy, the workday was smooth and over before we knew it and I headed home. I thought I might stay in, doing my best to avoid all the Papal Madness, but decided maybe a trip down the street to join a friend for happy hour wouldn’t be such a bad thing. The bus I was on did get stopped for a police motorcade, but I didn’t really think anything of it.

We were in the restaurant and had been watching Pope Francis’ events on the news when a little later we saw people lining up on the sidewalk and phones being whipped out. The first time appeared to be a false alarm, just more police, but the second time, people were getting a little more excited and I saw police keeping people out of the street, so we hustled outside to get a look in. 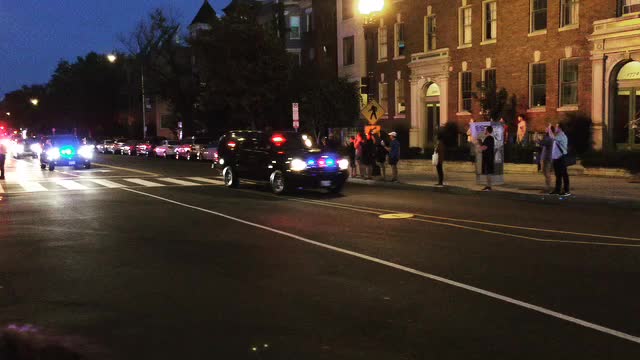 Sure enough, Pope Francis was heading back to the Apostolic Nunciature and seemingly taking a long way around as they traveled through Logan Circle before coming through Adams Morgan. I’m not religious by any means, but it was still pretty cool to get a Pope wave from his Fiat 500L while people cheered him on.

It almost made up for the road closures and tying up of the city his visit is causing… almost.

1 The moment you offer a government employee or contractor the option to not come to work, you’ve immediately lost them for any further conversation.