I don’t think I have enough words to express how much I love this ad from Dressmann: Underwear for perfect men, “At Dressmann we believe that everyone is perfect just the way they are. #JustTheWayYouAre”

For All 3.4 Billion Perfect Men

For decades people have been struggling with distorted body ideals. Ideals where someone else has decided what’s beautiful and what’s not. Who is normal, and who’s not. Statistics show that 80% of all men are unsatisfied with their body. The fact is that many men worry more about how they look than their economy and the wellbeing of their families.

The majority of people think that our unhealthy obsession with the body is a result of what’s presented in advertising. That’s why we will do what we can to change this. We want to take responsibility.

We can’t change the world in a day. But we have to start somewhere. As a first step we’re launching our new campaign for ManUnderwear showing that every man is perfect just the way he is. 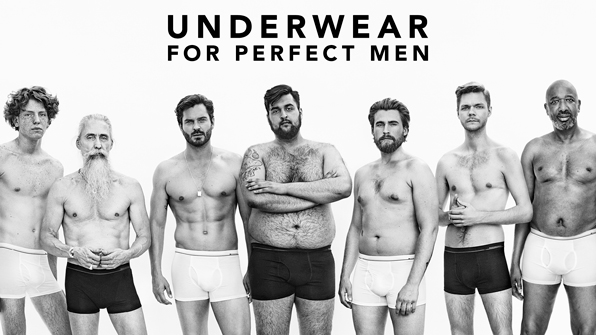 Not to take anything away from the women’s campaigns that figured much of this out a long time ago, but it’s a big deal to see an ad feature men of color, size (large and small) and age and not have it just be a viral story on Upworthy trying to be “heartwarming” or “heartbreaking”1.

So many ads I see for clothing often feature a “generic white man of the week” wearing all the clothes, to the point where most of the time I’m not convinced they haven’t just photoshopped a guy’s head onto other bodies. And it gets even worse when it comes to ads targeted at gay men–whether for outer- or under-clothing, travel, adult videos, fetish gear, etc. Basically, whatever is hot in porn is the standard for the ads. Often that’s because adult performers also model, so I get it, but at the same time, it’s usually going to be a well-built/muscled white man with the perfectly trendy haircut and facial hair of the moment.

Gay media: Because why feature PoC when there are so many white boys with the same haircut to celebrate? pic.twitter.com/O6z2LRDRKt

Any other or “others” have to carve out their own niche and often remain a fairly insulated group. Bears are a great example of a group that owns its attractiveness, but still manages to remain a group that is pretty white, overall and still worships muscled bodies, just those that don’t shave.

I’d love to see Dressmann’s move start to become a standard and maybe change some perceptions. I have to read too many articles about how when it comes to diversity and acceptance, the gay community is anything but, and adopting more inclusive ad campaigns like this could be yet another in the steps towards change.

1 Or “melt your heart”. Is there something about our hearts we don’t know, that these viral sites do? I’m starting to become convinced that emotional clickbait headlines are becoming the new Turing Test. Unless the machines can figure out and replicate natural emotional reactions, it will be their lack of same that really gets them, not the CAPTCHAs.