I think The Mary Sue said it best on their Tumblr blog. 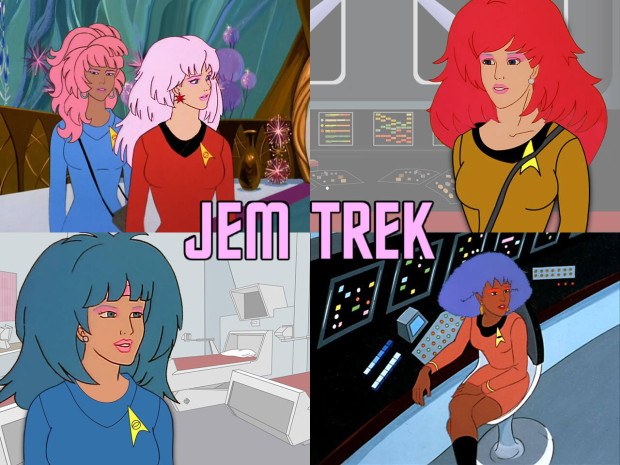 OH MY GOD WE NEED THIS SHOW IMMEDIATELY

Jem Trek. Seriously, someone please make this happen. As the movie was a terrible flop at the box office, this is the perfect time to resurrect the cartoon.

Perhaps they could send Jem and the Holograms into outer space, it worked for Josie and the Pussycats. So yes, Jem Trek.

Perhaps there ends up being a musical competition between The Holograms, The Misfits, and The Stingers to create “The Music of the Future” and place the winning songs into a time capsule to be opened in the mid 23rd century. The Holograms easily win the competition–or perhaps, as a twist, tie with The Misfits, and in one of Pizzazz’s efforts at sabotage, all three bands end up in stasis in the time capsule. Frozen for centuries, while the Starlight Foundation somehow keeps everything running off the royalties of The Holograms… or something.

Once in the future, Starfleet records show that The Holograms were the clear winners of the competition and offers them a field commission allowing them to serve on deck and in away missions. Angered by The Holograms’ ability to best them, even in the future, Eric Raymond and The Misfits steal away in a shuttlecraft and are captured by the Romulans who appreciate their talent for mischief and subterfuge. Maybe The Stingers join up with the Cardassians, or die due to a horrible accident while in stasis, nobody really cared about them anyway. Riot was only introduced as a love triangle interest to get between Jem and Rio–who should have been sticking to Jerrica, the lout!1

As a pitch, it could use some work. I’d best call in Lindsay2 to help round it out. But seriously, Jem Trek: Future Holograms. There hasn’t really been a band on Star Trek, just the occasional song or musical instrument. It would be outrageous! Truly!!

1 I have… opinions about Jem that I usually keep to myself.

2 But she’s too busy producing an excellent audio drama about Norse things.