Let’s Have A Candy Corn Tasting!

I don’t really care where others stand on the topic of candy corn. I know some people, like myself, love it and others hate it. We call those other people… wrong. Not only is candy corn a chewy sweet treat, but unlike many classic Halloween candies, it’s available year round! In recent years, I’ve noticed the companies putting out different flavors/styles of candy corn and I’d been joking for a while that I would do a tasting to see how these newcomers compare to the classic. 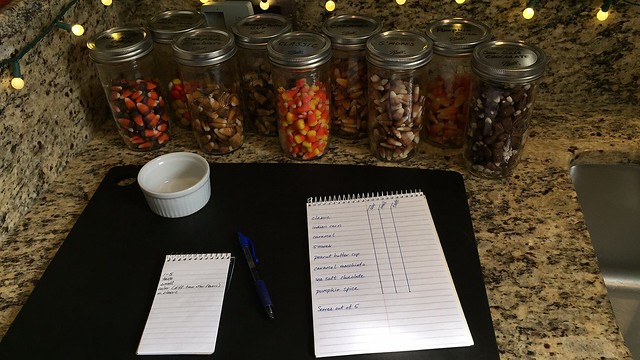 This year I finally, actually, did it. I don’t normally do “tastings” unless it’s my tasting something as I’m shoveling it my mouth. Because I wanted to keep it fun, I didn’t come up with a super-fancy scoring method, I just went by:

I settled on a 5 point rating because, I dunno, Amazon? Yelp? It’s what we’re used to. I looked, smelled and tasted a few pieces of each, then made a few notes. And then went to brush my teeth, so much sweetness. So, without further ado, in the order in which I tasted them. Fair warning: I am not a professional taster, reviewer, any of that. But I am someone who hunted down and bought 8 types of candy corn…

This was pretty much the control candy corn. But in giving it a really good examination–I tasted it twice–it sort of has honey notes, but I almost feel that’s the packaging working on my brain, “Made with Real Honey”. It is definitely super-sweet though, but it has a taste that isn’t just “sugar in my mouth”. At the least, you see it, you know it, and love it or hate it, it’s the OG candy corn. And yes, I could eat this stuff all night. I am not ashamed.

Easily spotted as the “poser candy corn”, it’s patterned after Indian, Flint or Calico corn, I always thought this would have a touch of cocoa. Turns out that’s the first thing I smelled, but there was also an odd hint of citrus that tasted a bit more orange-like after I had milk instead of water. I couldn’t chow down on this all night, but it’s more complex than I originally thought.

From here on out, it’s clear you’re not dealing with either of the classic flavors. Color choice is just different, but compared to the others it doesn’t stand out, nor does it have much of an aroma, but it definitely tastes like caramel. It’s like having a caramel chew and doesn’t deviate from that flavor. If caramel (“carmel”?) is your thing, this is the one for you.

It’s got the look, graham cracker and chocolate brown, and instantly smells like graham crackers. The taste is definitely graham and marshmallow, but oddly, they overpower the chocolate, it just wasn’t that strong. I don’t care all that much for real s’mores, but I could have eaten a few more of these without complaint.

I had seriously high hopes for this one. It does look like peanut butter and chocolate, and the smell is very chocolate’y, but the peanut butter taste is muted, much more than I would have liked. This one was also more prone to breakage than the others. It seems like the peanut butter flavored middle layer isn’t much of a load bearing candy.

I’ve heard from others that this is a seasonal favorite. It was good, the look of it, against the other flavors didn’t really stand out. The smell was impressive though, it was clearly evoking a fancy coffee drink, though much like the coffee version, didn’t have a strong note of caramel. The taste was a much gentler caramel than the plain caramel candy corn and there was a underlying note of coffee, not exactly coffee, but a strong flavor with a bit of a bite.

I am not a chocoholic, but I can’t deny that if you love chocolate and candy corn, this is the one for you. It looks like chocolate, it smells like chocolate, it tastes like chocolate with just a hint of salt to earn its name. In this version more than any others, a lot of the tips missed the conveyor belt, but the salted flavor is throughout, not just in the tip. (As a kid, I always believed each section had a different flavor.)

OMG, WHY DID I DO THIS TO MYSELF? WHAT PENANCE AM I DOING FOR HAVING WRONGED IN ANOTHER LIFETIME?!

This is like eating pie spice. Not like eating pumpkin pie, but as has been explained by several infographics: pie spice. Its color is just different enough from the classic that you might not make the mistake of eating it, and it has an aroma to warn its predators that it should not be eaten. Finally, it really does taste like you just tried not only the Cinnamon Challenge, but also added in Ginger, Nutmeg and Cloves just to spice things up. If you absolutely love Pumpkin Spice [Foods], I can’t say you won’t love this. Just don’t blame me, I tried to warn you.

I feel like I should have prefaced this with, “Do not try this at home, I’m what you’d call, an expert.” And even so, fun as it was, I might never want to do something like this again… ever. I bought both the White Chocolate Candy Corn m&m’s and Hershey’s Candy Corn Creme Bars to serve as honorable mentions, but I couldn’t even look at them. (Plus, they’re both pretty gross, I will admit that.) 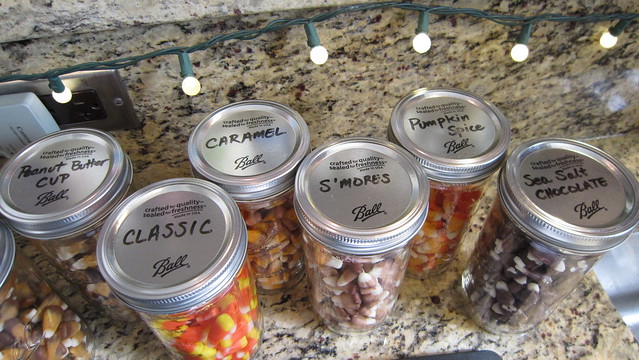 When all is said and done, I’ll stick with my Classic flavor, after that my picks would be: Sea Salt Chocolate, S’mores and Caramel Macchiato. They’re different enough from the original and stand out from the pack with distinctive flavors that I enjoyed for more than just a few pieces.

Whatever your candy of choice, I hope this Halloween night is a safe and fun one. I would say don’t eat too much candy, but clearly that ship has sailed! Happy Hallowe’en!