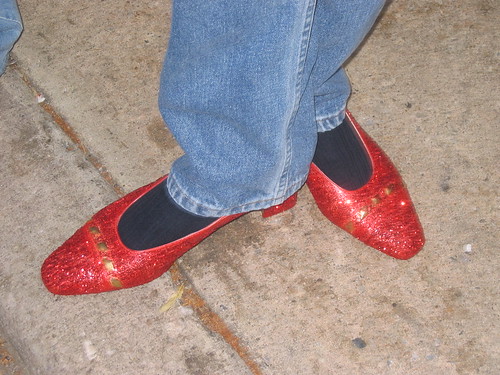 No.. not MY shoes.. thank goodness. See below for all the Balt Pride pics.

So good to get away for the weekend, but just as nice to come home… especially to air conditioning!

I actually JUST got back from meeting with my father for a drink. He’s in town on business and for once I was completely free to meet with him and have a chat. He got to see just how snobby I am that I know when I ask for a gin & tonic with Bombay Sapphire in it and I get served one with Tanqueray, that I know the difference and I will send it back.

But we chatted about things we rarely do, namely gay things. He asked how my love life was and if there were someone special if I’d want to bring them home to meet the family or not. These are topics that have never come up in conversation before with my father. So I have to admit I was impressed. Plus we had long chats about the topics of the day and race and education and politics. I was a bit amazed when I realized nearly 2 hours had gone by. He’s in town until Tues morning, so we might get a chance to grab a bite to eat tomorrow evening. — He’s been to Fogo de Chao as well and loves it… which confirms that we are indeed related. He also gave me some good DC steakhouse recommendations. Local friends, have your wallets at the ready, please.

Baltimore Pride was a lot of fun, though more fun stemmed from just hanging out with my friends, I need to visit and have slumber party fun with Michael more often. We hung out and watched Underworld: Evolution before heading up to Baltimore, then after getting back from the parade/block party and dinner, we stayed up and watched SNL (with oh so yummy James Blunt) and I was so exhausted that after we’d both gone to bed, he came to my room maybe 10 mins later and I was already sacked out. He’s lucky I heard him at all.

This morning I had a great brunch with Michael and Claude at the Hickory Ridge Grill. I haven’t been served pancakes, sausage and eggs in a while where I was able to wolf down the entire meal, it was so delicious! Everett joined us and we headed up to Druid Hill Park in Balt for the festival, which frankly was very much like DC’s festival except the groups were arranged in a more circular fashion along the lanes in the park instead of one big straight line. We caught up with Bill, Ken, John, Hal and Eric (I think) and I saw CJ again and Steve and Hawk from bowling. I had a lovely chat with a woman on stilts who told me that she was actually afraid of heights and then the heat just got to be too much and we broke away to get a bite to eat and more conversation and eventually we made our way back home where I had about 5 mins to shower and change before heading out to meet my father.

I also had two of the least crazy and insane cab rides to and from the hotel tonight that I think I’ve had in DC ever… while sober.

Here’s to the week ahead, movie mid-week and possible happy hour Friday if I nudge Moose to see if we’re still trying to arrange one, otherwise pretty sedate, which is good if the weather continues in this fashion. I’ve got the a/c on and I’m sweating just from typing. *bleh*

See all the pics from Baltimore Pride.