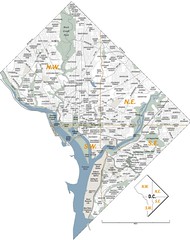 You have got to be fscking kidding me…

Hungry for Whole Foods, Wooing of the Upscale Grocery Highlights Tension Over Changes in Columbia Heights

Heather Cooper sat at her computer and composed a love note to Whole Foods Market. Please, open a store in my neighborhood, Columbia Heights, she wrote to the nation’s biggest organic grocer.

She wants organic avocados within walking distance, of course. But she also wants to make a statement.

“Whole Foods would symbolize that the neighborhood is not just up-and-coming; it would mean that it had arrived,” said Cooper, 28, who moved there two years ago. “It would not only be an addition to the neighborhood, I think it would help our real estate values.”

I don’t even know where to start with this one. First off, as DCist very ably points out the current Whole Foods is less than 2 miles away. For Columbia Heights and Mount Pleasant residents, that means a quick metro trip + walk, an even more convenient bus ride, or for the many of them that have cars an even shorter drive to a parking lot. Secondly, a brand new Giant just went in recently and it is a nice store, the first time I went in there I was shocked that I was still in my neighborhood. And it’s just a testament to the changing face of the whole area, this woman moves in 2 years ago and decides that the neighborhood clearly isn’t rising affulently fast enough, we must need a Whole Foods! Not to point her out specifically, but there are many like her that have the same set of opinions.

A Target and Best Buy are already coming into the development project that they’re considering putting the Whole Foods in and I don’t even think we need those! Again, Best Buy is reachable by metro and anyone that needs Target has a car or a means to get to one and those of us that don’t have managed to get by without one. About the only thing good that seems to be coming is a gym, which I don’t think I’d be interested in, but it’s a far more viable business for the area as I don’t think people should have to travel too far to their gym.

I’m somewhat conflicted in just what my main problem with this is, it’s destroying the personality of a neighborhood that’s been doing just fine, not great, not booming but fine since I moved to DC. A lot of the gentrification seems fueled by the “new face” of the neighborhood, whites are moving in, blacks are moving out, mostly because they can’t afford to live there anymore. But mostly, why the hell do we have to take a pretty city like DC (yes, it really is pretty) and move so much goddamn retail into it?! The article talks of a recent resident that moved from Dupont Circle and asked her nail salon to open a location in Columbia Heights–“I’m just thinking of all the things I miss from my old neighborhood.” Again, Columbia Heights to Dupont Circle, if you’re too lazy to WALK there, it’s such a short drive it’s hardly worth bringing a CD, and the bus ride is short and worry-free.

It just doesn’t make any sense to me. Are people so entitled that they have to have every convenience at their very doorstep? Did you actually move to a “big” city and think it would be all brownstones and fruit vendors and everything you could ever need within walking distance? Just like the Chinatown facelift, people won’t be happy until all of D.C. turns into a bright and shiny Disney World. And then they’ll realize that even they won’t be able to afford living here…

Lauren Tobias, 29, a communications consultant who lives at 14th and Chapin streets, spoke glowingly about the prepared foods at Whole Foods and how young professionals want the convenience of picking up a quick, healthy dinner. Then she caught herself. “I don’t want it to sound like I’m one of the new people and I need all these services,” she said. “But a Whole Foods is just needed.”