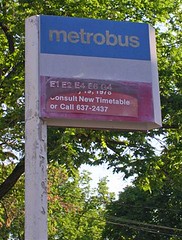 And apparently the Washington Metropolitan Area Transit Authority sucks as well. They’re discontinuing some bus routes and decided that the best way to do this would be to … not post signs or notices in metro stations or inside buses and not update their online Trip Planner so that trips planned after the change date remove those routes as travel options.

Dr Gridlock at the Post notes some “concern” about the bus line changes and WMATA has a press release about the changes starting this Sunday. It doesn’t look like any of them really affect me, in fact I’ll be getting more buses on some of the routes I take from home and work, but that 5B is gonna hurt as I have used it to get out to Tysons Corner before, and I’ve sometimes ridden the Mt. Pleasant H5 & H7 as well to get home easily from the Giant when I go get my huge-ass roasting chickens.

But on a positive metro note.. this morning exactly 2 weeks after I spotted Mr. Missed Connection on the train and we’ve joked about how that’s never happened since — I was running late again this morning and who should I come upon “resting his eyes” on the morning ride. So we had a good laugh about that and a little chat on the way in. Hopefully it should be a good day, I brought the Bed Bath & Beyond gift card Mike and Mikey gave me, and I’m prepared to spend the Amazon gift cert. Richard gave me – bring on the shopping!