Someone should be filming this! 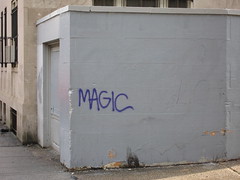 *yawn.. Oh look at that, another long weekend. We get so spoiled right around the new year.

It was a quiet weekend for the most part, did some cleaning and whatnot. Whatnot is my way of saying that I didn’t actually do any cleaning at all but instead sat around on my ass most of the time watching TV and playing games. I did get trash thrown out and dishes cleaned though, so that’s something. I finally got around to uploading pictures from the past week or so, and worked on a little bit of digital file management to free up space on the various hard drives. I’ve been tempted by a serious drop in prices on refurbished macbooks from Apple, primarily for the processor speed. My mini does a great job for light tasks, but more intense jobs, I know I’ll just leave it on overnight.

We went for brunch and then bowling on Sunday. Belga Cafe on the hill was really nice, the place looked great and the menu was very Belgian. Unfortunately the service wasn’t terribly friendly, but it wasn’t bad enough to sour our experience. Upon observation all our table was lacking was an even number of boobies, since any other table with women present seemed to bring out the smile and service from our server… just not ours. Oh well.

While I don’t normally keep a running tally in my head, currently Everett holds the record for The Most Mortifying Statement of 2007. Not that this is surprising, but with what he whipped out, believe me folks, he’s gonna be hard to beat*.

I finally understand how to use iDVD. I’m not sure what light turned on in my head, but the previous times I tried to use it, it was an exercise in frustration, but last night it all clicked. I’d recently TiVo’d an episode of Wisecrack on Logo starring Miss Coco Peru. I last recorded it in Feb 2006 and the first few minutes were cut off. I’d been searching for it ever since and they finally ran it again (a year later!!!) and I nabbed it and downloaded it to my PC. I was going to use Nero to burn a DVD after editing out the commercials, but I knew I wouldn’t be 100% happy with the final product. Nero is ok, but their DVDs always end up looking homegrown whereas I know Apple’s D-I-Y DVDs tend to look much more polished even if everyone in the world is using the same templates. So I pitted them against each other and created disc images figuring I’d burn the prettiest. In terms of ease, Nero wins. It was able to take an MPEG-2 file, edit it, convert it, create chapters from the edited spots or wherever I wanted and give a pretty good looking DVD in under an hour. Apple wouldn’t even see the MPEG-2, so I had to have Nero convert it to DV (which took no time, really) and then we were off and running. iDVD’s magic wand feature worked out pretty well and of course produced a very slick looking menu and chapter selection screen. It didn’t take all that long to process the video and I’m definitely happier with it. I’m going to try to make a dvd of season 1 of Look Around You tonight.

If you haven’t seen her special, it’s definitely worth trying to see. I think the whole thing is online or you could just borrow the DVD from me. The following clip is after she was talking about her appearance on Bravo’s groundbreaking Boy Meets Boy and her first encounter with Andra (“this is one crazy bitch”). She experienced a moment that I think we’ve all had after the reality genre made it big…

* I am not really encouraging or opening this up to competition, it was just one of those moments where you can’t believe you’re really hearing what you’re hearing…