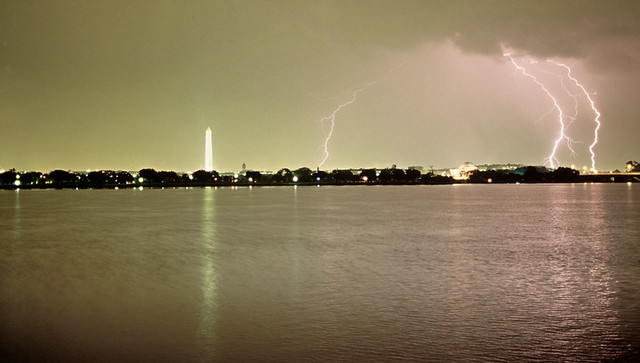 Some storm last night, huh? (ok, that picture isn’t from last night but you get the point) It woke me up in the wee early hours. I thought it was my nature mp3s, but after the bright flash and subsequent BOOM I figured maybe something was up outside. And then I got pissy — this makes the second time that weather has intervened with I make plans with Mike and Mikey. Thankfully this probably won’t last through to this evening, but it’s a conspiracy y’all, I’m tellin’ ya. Well it can rain and storm all it wants ‘cos I am telling you, I’m not cancelin. You’re the best plans I’ve ever known, there’s no way I can let ’em go. No no there’s no way… I think I’ve had too much caffeine today, but Starbucks Dulce du Leche latte does taste just like tipping back a few spoonfuls of Häagen-Dazs with coffee.

I know this Onion headline shouldn’t make me laugh but it cracked me up: Area Man Has Sex With Man To Get Out Of Office Blood Drive

I am still watching Alanis’ spoof of “My Humps” because it makes me laugh. She’s said it was an April Fools joke, but I think we could use more slow-tempo covers.

Music today is the girl without everything, Tracey Thorn – “Out of the Woods”. Due to metro train delays and long Starbucks lines, I got to listen to the whole thing before even sitting down at the office. It’s hard to hear her voice without thinking of EBTG and her work with Ben Watt, but just like Heather Small (“Proud” from Queer as Folk and Akeelah and the Bee) was able to break away from M People she does very well on her own. It’s hard to say whether I’d put this under Pop or Lo-Fi, probably the latter as her voice is very good but not what I’d classify as powerful. I do like seeing the talented female vocalists break free of “singin’ hooks” as Missy Elliot would say, move the name out from behind the word featuring and put it on the album cover. Who’s next?